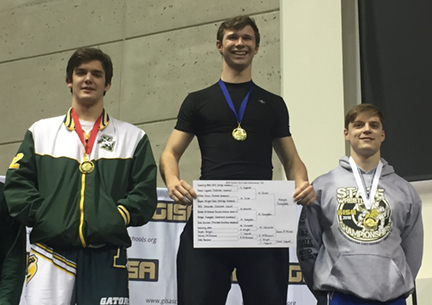 AMERICUS – Fresh off their eighth-straight region wrestling title, the Southland Raiders Wrestling Team came into the GSW Storm Dome on Friday and Saturday, February 2-3, ready to do something they hadn’t done since 2002: win a wrestling team state championship at the GISA State Wrestling Tournament.

Southland was seeking team and individual glory. This year, the Raiders were hosting the tournament, and they wanted this year to be the year.

However, they would face the state’s best wrestlers and it would be a daunting challenge. Southland junior Cole Landreth came into the tournament having won the state championship in the 126-lb. weight class a year ago, and he was the state champion in the 106-lb. weight class as a freshman. Now, Landreth would be wrestling in the 145-lb. weight class. Southland Senior Captain Morgan Youngdale came so close to tasting gold a year ago in the 182-lb. championship match, but had to settle for second. This year, Youngdale was ready to make amends by winning state in 2018. Southland brought other wrestlers from other weight classes who were talented and hungry to succeed as well. 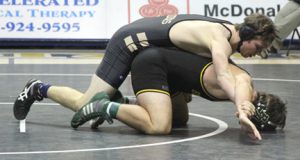 “Overall I was very pleased”, Southland Head Coach Mike Smith said. “The thing that we always look for is a kid who gives everything he’s got and he won’t quit. You can work with him and he’ll make you proud in the end.

Things started well for Landreth. He won both of his first two matches on Friday, pinning both Greg Griffin of Pinewood Christian and Jadon Tidwell of Windsor Academy. His strategy going into his second match against Tidwell was simple and to the point: “Be smart and don’t do anything foolish”, Landreth said. That second win put Landreth into the semifinals of the 145-lb. division championship. Landreth defeated William Gay of Trinity Christian-Dublin to get to the finals. Landreth, now 19-0 on the season, was primed and ready to defend his title. In the championship match, Landreth would face and eighth-grade prodigy: Tyler Lillard of Mill Springs Academy in Alpharetta, GA. Lillard came into the finals at 14-0. A High School All-American and Junior Olympian, Lillard would be a tough hurdle for Landreth to climb. Landreth performed well against Lillard early on, but got pinned by Lillard and had to settle for the second place.

Now, it was up to Morgan Youngdale to bring home the gold for the Raiders. Youngdale pinned Pinewood Christian’s Cade Beecher in the first round, and defeated Will Schneider of Gatewood in the second round to get to the finals against Wilson Joyner of Bulloch Academy. Saturday would be redemption day for Youngdale, as he pinned Joyner to win the state championship for Southland in the 182-lb. weight class.

While Youngdale and Landreth were the only Southland Raiders to make it to the finals, other Raider wrestlers shined in the GISA State Tournament.

In the 106-lb. weight class, Cayce Joyner won his first match as he pinned Mitchell Gay of Trinity Christian-Dublin. However, Joyner lost his second match to eventual finalist Nic Sapp of Westfield. However, on Saturday, Day 2 of the tournament, Joyner fought his way through the consolation bracket to get to the third-place match against Spencer Sharp of Bulloch Academy. In a hard-fought match, Joyner was able to beat sharp to finish third in the state in the 106-lb. division. In the 113-pound weight class, Southland’s Landon Griffin lost to eventual finalist Harrison Wren of Bulloch Academy, but fought his way to the third-place match. Griffin defeated Ethan Asbell of John Milledge Academy to win third place.

“Overall, the team produced a lot of points”, Smith said. “No one person or two people carried us. I’m really proud of the team effort.

Here’s a summary of the Southland place finishers: