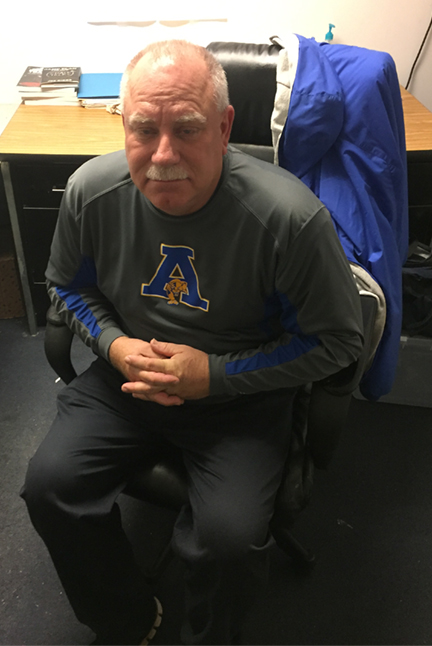 AMERICUS – Everybody has a passion in life…something that they like to do. All people want to pursue different pathways to success. Some want to be doctors in order to help people stay healthy. Others want to be lawyers, and others want to learn a skill or a trade that will last them for a lifetime.
For the past 34 years, Americus-Sumter Head Football Coach Erik Soliday’s passion has been coaching football and making a difference in the lives of young people. “I played football in high school and college. I just always loved it”, Soliday said. “My high school and college coaches were big influences on me. I guess it just made me decide I wanted to do the same thing and try to be an influence on other people. That’s what I got into.”
After 29 years of coaching high school football in the Georgia public schools, Soliday, 55, has decided that it is time to retire from public school teaching and coaching, and move on to the private school sector. As of the end of this school year, Soliday will be leaving Americus-Sumter to be a teacher and the head football coach at Tiftarea Academy in Chula, GA. “I’ve decided to take the job at Tiftaarea. It’s an independent, private school”, Soliday said. “I’ve been doing this for a long time. After 34 years, I figured it was time to slow down and retire. I still like the coaching aspect of it a lot. It’s ten minutes from my house. It’s an opportunity to keep coaching, so I just decided to go ahead and retire and take that job”, he continued.
According to Tiftarea Academy Head Master Stacey Bell, in addition to being the head football coach, Soliday will serve full-time on the faculty, but it has not yet been determined what subjects he will teach.
Soliday began his coaching career at his alma mater, Fairmont State University, an NCAA Division II school in Fairmont, WV. He was a wide receivers coach there from 1984-1989. He came to Georgia in 1989. His first high school head coaching job was at Turner County, where he coached for eight years. Soliday then moved on to Henry County, where he coached for two years before coming to Americus-Sumter in 1999. During his five-year tenure as the head coach of the Panthers, Soliday guided Americus-Sumter to a GHSA Class AA State Championship in 2000. After his first stint at Americus-Sumter, Soliday went back to Turner County, where he coached for nine years. From there he went to coach at Perry High School for two years. Then in 2015, Soliday came back to Americus-Sumter, where he has been ever since. This past Fall, Soliday guided the Panthers to a 9-3 overall record and a Region 1-AAAA Championship, going undefeated in the region at 7-0. On October 28, 2017, Soliday won his 200th game when the Panthers beat Columbus 33-9. The Panthers advanced into the second round of the state play-offs before losing to Thompson in overtime 35-34.
A native of Sistersville, WV, Soliday played high school football at Sistersville High School. While in high school, he played quarterback, safety and was a kicker. “Our high school went to the state championship ten-straight years in a row”, Soliday said.
After graduating from high school, Soliday played college football at Fairmont State from 1981-84. He was slated to be a safety and a kicker. He was injured, but still kicked for the Fighting Falcons.
When asked what his most memorable moment as a coach is, Soliday mentioned the 2000 State Championship at Americus-Sumter. “That first state championship was a really fun and memorable year”, Soliday said.  Having coached for a total of 34 years, Soliday has coached a lot of talented players. As far as his most favorite player to have ever coached, he couldn’t name one specific guy. However, there are a few players that stick out in his mind. “You know, there’s been so many over the years. There were a lot of great players”, Soliday said. “Leonard Pope was certainly a great football player here. John Harris and Jermaine Allen, who played here, were both just tremendous ball players. Robert Johnson, our quarterback at that time, was a tremendous player. I’ve had a bunch of them over the years. They’re all different. All of them had something a little different that they offered…just a lot of great players over the years that were fun to be around. The ones I mentioned (Leonard Pope, John Harris, Jermaine Allen, Robert Johnson) were some of the ones that stick out, I guess.”
For those young people who aspire to get into coaching, Coach Soliday’s advice to them would be to work extremely hard and learn as much as you can. “Get in somewhere and start working”, Soliday said. “Do whatever it takes. This isn’t a job to get into for the money. If you divide up the hours by what you get paid, it doesn’t come out to a whole lot. You really have to care about kids. Let them know you care about them and put them first. You don’t have a whole lot of time for hobbies. I’ve told a lot of young guys this: There aren’t many jobs people will take where you say ‘All right, you’re going to work from July to December. There’s zero days off. There’s no sick days. You’re going to work from 7 a.m. till usually 10, 11, midnight every night. Everybody’s going to fuss at you. It doesn’t matter what you do’. There aren’t a lot of jobs people would take that advertise that way, but that’s coaching. It’s something you have to love.”
Coach Soliday went on to say that he believes the Panthers have another very good team coming back next Fall, as well in the future. He hopes that the next coach will be able to reap the benefits and have great success.