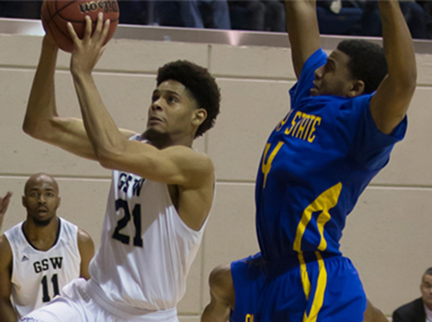 Devin Watson scored 20 points to lead GSW to a 74-72 win over Young Harris on Sunday.

In addition to Watson’s performance, Hasaan Buggs recorded his ninth double-double of the season for GSW. This is the first time the Hurricanes have swept Young Harris in a season since the two schools began competing against each other in 2013. This season’s first meeting with Young Harris resulted in an 88-82 overtime win for GSW back on January 6.

The win puts GSW at 11-8 overall and 7-8 in the Peach Belt Conference. Young Harris falls to 6-15 overall and 5-10 in the PBC. They were led in scoring by Ben Waterhouse and Nicksen Blanc. Each of them scored 16 points.

GSW didn’t score again until the 13:45 mark of the first half when R.J. Sessions scored on a layup, cutting the Mountain Lions’ lead to 7-4. The largest deficit for the Hurricanes in the first half was six points. Andre Statam scored, was fouled, and converted the three-point play inside the final 30 seconds. Both teams would go into halftime tied 30-30.

The Hurricanes woke up to start the second half, scoring seven unanswered points. The first came on a dunk by Buggs and the next five points were scored by Watson. At that point, GSW never looked back. The Hurricanes built a game-high 12-point lead at 55-43 midway through the second half. However, Young Harris made a strong run in the closing minutes. With 2:47 to go, Jason Weaver put the Hurricanes ahead 68-57 with a three-pointer. However, Young Harris made a furious comeback, closing the gap to three points. Statam made two clutch free throws with seven seconds left to seal the victory.

The Mountain Lions outrebounded the Hurricanes 38-33. GSW made 30-of-59 shots to finish over 50 percent for the sixth time this season. Young Harris was held to 44.6 percent shooting.