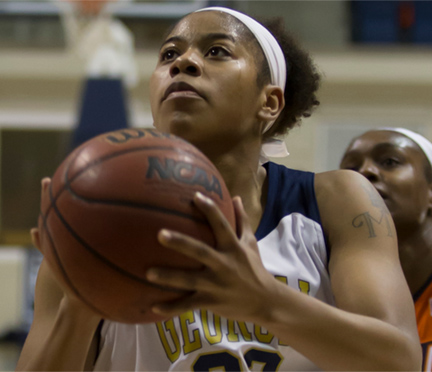 Amanda Melosky also had a double-double for GSW. Melosky scored 11 points and pulled down 10 rebounds. It marks the first time this season that two GSW players recorded a double-double in the same game.

The win was crucial in that it moves the Lady Hurricanes to within one game of the final Peach Belt Conference Tournament spot.

It was a high-scoring, back-and-forth affair in the first quarter. Neither team led by more than four points. Georgia Southwestern went on an 8-2 run over the final 2:08 of the quarter to take a 24-20 lead.

GSW increased their lead to 17 points two minutes into the fourth quarter, their biggest lead of the game. However, Young Harris wouldn’t quit as they scored the next seven-straight points to cut the lead to 10 with 3:26 to go. Thanks to GSW turnovers, the Mountain Lions’ Briana Bell hit three-straight three-pointers to cut the Lady Hurricanes’ lead to three points. After Shanya Jones was fouled and made one free throw to put GSW up by four, Sara Jorgensen knocked down a three-pointer for Young Harris. All of a sudden, a 17-point lead had dwindled down to just one point.

With two seconds remaining, GSW turned the ball over, giving Young Harris a chance to win the game. GeNaisha Robinson got behind the GSW defense and got an open look, but couldn’t convert the layup as time expired. The Lady Hurricanes escaped with an 87-86 win.

Georgia Southwestern outrebounded Young Harris on the glass 56-41. Of those rebounds, 25 of them were offensive rebounds, which were converted into 20 second-chance points.

The Lady Hurricanes will travel to Columbus on Wednesday to take on Columbus State. Tip-off is scheduled for 5:30 p.m.