Lady Panthers edge out Hardaway in region tournament first round 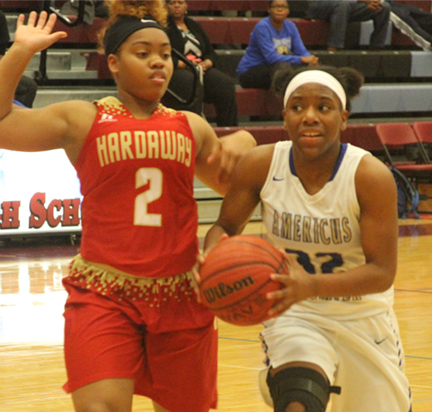 While each team had vastly different records, it didn’t show up on the court as the Lady Hawks went toe-to-toe with Americus-Sumter. The two teams split during the regular season, and it was the rubber match for the right to continue on in the region tournament in hopes of qualifying for the GHSA Class 4A State Tournament.

It came down to who could hit free throws, who could take care of the basketball, and who could make plays on defense. Americus-Sumter (20-6) was just slightly better than Hardaway in all three phases, particularly at the end of the game. With 10 seconds left and Americus-Sumter up 36-33. Hardaway’s Trinity Eubanks scored and was fouled. However, Eubanks couldn’t make the free throw which would have tied the game, and Americus-Sumter survived to move on with a 36-35 win.

“I thought we played pretty good defense almost three-and-a-half quarters”, Americus-Sumter Head Coach Sherri Harris said. “Some of the fouls that we got called on us were actually fouls. We made some crazy fouls at the wrong times that put us in a bad position. Your leading scorer (Jykiera Long) and your best post player (Brianna Pope) are on the bench.”

Both Long and Pope fouled out in the fourth quarter, making it very difficult for the Lady Panthers. They were unavailable for the last five minutes of the game.

Free-throw shooting for Americus-Sumter was a problem in this game. The Lady Panthers started off well in the first half, going 7-of-8, but finished 18-of-33 for the game (55%). “We weren’t very good in the third and fourth quarter”, Harris said. “I guess they got a little tight right there at the end when you have to knock them down, but we squeaked out of it.”

Hardaway was even worse from the free-throw line. The Lady Hawks shot 9-of-24 from the foul line (38%). If there was one big difference that gave the Lady Panthers the edge, they were only slightly better from the foul line than Hardaway. Both teams started out strong on the foul line in the first half, but plummeted in the second half.

“We did good, even though I fouled out”, Jykiera Long said. “We pulled through. We came out with a W.”

The first quarter was a back-and-forth affair between both teams. Both teams traded baskets. The quarter would end with the Lady Panthers up 10-9.

Up 15-13 in the second quarter, the Lady Hawks increased their lead to four on two free throws by Eubanks. Both teams were hitting their free throws in the first half. Jykiera Long was fouled with 1:22 left and sank both free throws. With 51.9 seconds left in the first half, Long was fouled again and sank both free throws, tying the score at 17-17. Americus-Sumter took the lead with around 20 seconds left when Deasia Ford scored on the inside. The half ended with the Lady Panthers owning a 19-17 lead.

Early in the third quarter, Deasia Ford was fouled and hit one of two free throws. Both teams struggled shooting from the field in the third quarter, missing easy shots on the inside, as well as from the outside. Then with 4:54 to go, Johnson was fouled and made one of two free throws, giving ASH a 21-17 lead. Hardaway struggled in the third quarter with turnovers, which gave ASH extra chances to build their lead. This was a problem for the Lady Hawks throughout the second half. However, with 3:58 to go, the Lady Panthers were called for traveling. Genesis Adams was fouled a few seconds later, and Hardaway had a chance to cut the ASH lead, but Adams missed both free throws. ASH couldn’t score on their next possession, but Hardaway turned the ball over again.

Americus-Sumter had only scored two points in the third quarter until Nyja Carson scored a layup with a little over two minutes left. Shidajah Johnson had a chance to increase the Lady Panthers’ lead with 2:12 to go, but Johnson missed both free throws.

With 1:23 to go in the third quarter, ASH went to full-court pressure. They were able to produce a steal and get the ball. Deasia Ford was fouled and made one of two free throws, making the score 24-17 ASH with 1:24 to go. Jykieria Long recorded a steal with 1:14 to go and was fouled. Long, who is normally automatic from the line, made one of two foul shots. Americus-Sumter went to their full-court pressure again, forcing a timeout by Hardaway with 1:09 left in the third. The Lady Hawks cut into the lead when Diamond McGilberry banked a three-pointer off the backboard, making it 25-20 Lady Panthers. With 10 seconds left in the third, ASH had the ball, however, Long’s three-point attempt at the horn was no good, and both teams started the fourth quarter with ASH up 25-20.

The Lady Hawks would not go away. Just seconds into the final quarter, McGilberry hit a three-pointer to make it 25-23 Lady Panthers. After Ford hit one of two free throws, the Lady Panthers were up 26-23. However, the Lady Hawks score three-straight points to tie the game at 26. Jykiera Long was fouled with a little over seven minutes to play, and hit one of two free throws. ASH had a 27-26 lead at this point. Hardaway had a chance to take the lead with 6:35 to go, but Diamond McGilberry traveled. Then with 6:11 to go, Jykiera Long drove to the basket, scored, and was fouled. Long hit the free throw and the Lady Panthers were up 30-26 with six minutes left in the game.

Americus-Sumter continued to apply full-court pressure and got another steal. With 5:21 to go, ASH coach Sherri Harris decided to call timeout. With 4:39 to go in the game, Genesis Adams was fouled and made one of two free throws, cutting the Lady Panthers’ lead to 30-27.

Both teams continued to struggle scoring in the fourth quarter. It appeared the game would be decided at the free throw line and who would take care of the ball. The Lady Hawks were able to make another free throw to cut the lead to 30-28. Then Adams tied the game at 30 when she scored on the inside.

With 3:05 left, Shidajah Johnson was fouled. Her first free throw rolled around the rim and out, but her second one was good. A time out was called with 3:05 left in the game with ASH up 31-30.

Out of the timeout, Hardaway had the ball. The Lady Hawks worked the ball around and found Adams inside for a layup, giving Hardaway a one-point lead. However, Americus-Sumter didn’t panic. They moved the ball around the perimeter and found Nyja Carson all alone for a layup with 2:08 to go. Out of a timeout, the Lady Hawks broke Americus-Sumter’s press and found Adams, who drove to the basket and was fouled. However, Adams missed both free throws.

With 1:56 to play, ASH had the ball and Deasia Ford was fouled. Ford made one of two free throws, giving ASH a 34-32 lead. Hardaway decided to call timeout with 1:43 to go. Americus-Sumter had the ball with a little over a minute left, but Hardaway was able to force a steal and called timeout with 1:10 to play. Out of the timeout, the Lady Hawks got the ball into Adams, who was fouled. Adams hit one of two free throws, and Americus-Sumter was up 34-33 when Harris called timeout with 44.1 seconds left. With 39 seconds left, Shidajah Johnson was fouled and sent to the line. Johnson missed the first, but made the second. The Lady Panthers were able to force a steal, and Tykiera Long was fouled. Long made one of two, and ASH was up 36-33 with 23.3 seconds to go.

Then with 10 seconds to go, Hardaway’s Trinity Eubanks drove to the basket, scored and was fouled. Eubanks had a chance to tie the game, but missed the free throw. The Lady Panthers were able to escape with a 36-35 win. Hardaway finishes its season at 11-15. The Lady Panthers will play their next tournament game at Americus-Sumter on Thursday. Time and opponent to be determined.