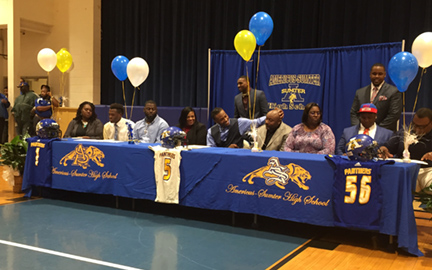 For three football players at Americus-Sumter, it was a special day for them, their families, their fellow teammates and their school friends. Kobe Lewis, Brae’lin Williams and Malcom Mercer each signed their letters of intent to play at their respective colleges.

Lewis, a wide receiver and cornerback on the ASH Football team and a member of the basketball team, signed his letter of intent to play at Central Michigan University, where he will play safety for the Chippewas. As far as academics is concerned, Lewis wants to study Mechanical Engineering. Lewis has big plans after college. “If not the NFL, I would first like to start out with a good job and end up owning my own business. I’d like to own an auto body and collision shop”, Lewis said. Lewis had offers from Georgia Southern and Georgia State among others, but in the end, chose Central Michigan. “I chose Central Michigan because they were the first ones to offer me”, Lewis said. “They stayed loyal to me the whole time. They recruited me hard the whole time. I built a great relationship with the coaches, so at the end of the day, I felt that is where I needed to go.” Malcom Mercer, who played defensive end and tackle for the Panthers, signed his letter of intent to play at West Georgia University, where he will play defensive end. “At West Georgia, they run a 4-2-5 defense, so I’ll probably be in a three technique or a five, depending on the situation”, Mercer said. Mercer was recruited by Kennesaw St., Valdosta St., and Jacksonville University among others, but chose to play for the Wolves. “I chose West Georgia because it feels like home”, Mercer said. “I played with two guys that I grew up with, Benjamin Walters and Ahmad Mosley. They’re still up there now. I’ll be with them next year.”

Mercer went on to say that West Georgia doesn’t have the exact major he is looking for, but said that they do have Community Health and Wellness. He will be taking up that discipline.

Brae’lin Williams was a wide receiver and a strong safety for the Panthers. He announced to the crowd assembled that he will be furthering his education and playing football at William Penn University, an NAIA school in Oskaloosa, IA. Williams will play wide receiver and a little bit of slot back for the Fighting Statesmen. Williams plans to study Physical Education and would like to become a coach after he graduates.

Americus-Sumter Head Football Coach Erik Soliday had nothing but high praise for these three players. “They have meant a lot to this program because they’ve played the last three years. They were a lot of the heart and soul of this team”, Soliday said. “Everything was kind of built around these guys. They were very good leaders for us. They were good role models for the other kids. These are what a great team has to have: kids like this. Hopefully, the young kids saw what they did and will follow what they did and will continue what they did. Hopefully, a year from now, they’ll be sitting up there signing.”