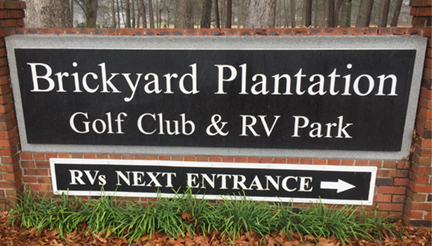 AMERICUS — A local golf course and camping site in Sumter County will be getting some much-needed exposure for the county. Brickyard Plantation Golf Club & RV Park, located at 1655 U.S. Highway 280 East in  eastern Sumter County, recently became a franchise of Kampgrounds of America (KOA), a national camping organization with over 500 campgrounds in the US.

“Brickyard Plantation has been around since 1979”, said Debra Sykes, general manager of Brickyard Plantation and Americus KOA. “We have a regular traditional golf course and a campground associated with it. In April of last year, we franchised with KOA, which is Kampgrounds of America. KOA is a national brand. It gives not only us as Brickyard exposure with the country. It also gives Americus and Sumter County great exposure.”
Debra and her husband, Charles Sykes, own the 500-acre property. They have been very successful due to their upkeep of the property and their warm hospitality shown to visitors. As a result of their hard work, they won the KOA Presidents and KOA Founder’s awards.
“They (KOA) have a national directory which will come out next month and we will be printed in the directory”, Sykes said. “We already have an on-line presence with them because you can go to the koa.com app and book reservations with us.”
Visitors to the Americus KOA and Brickyard Plantation can expect several amenities and fun things to do. As far as golf is concerned, the first nine holes resemble a traditional, regulation golf course, while the back nine take on the form of a Scottish links course.
In addition to the regulation golf course, visitors can enjoy different types of golf. with green fees included during their camping stay. The campground also has a nine-hole “foot golf” course, played with a soccer ball and a 21-inch wide buried cup.
Visitors can also play nine holes of disc golf. Playing disc golf involves throwing a frisbee-like disc into a basket. There are two exciting golf events scheduled at Brickyard in the next few months. On March 3, the park will host the Open at Brickyard, which will be a disc golf event. Then in June, there will be a competition involving all three kinds of golf. “We are organizing a tri-golf-a-thon”, Sykes said. “We’ll be playing all three formats in one competition. That’s going to be a three-person scramble, playing three formats of golf. You’re going to play ball golf, foot golf and disc golf.”
The success that the Sykeses have enjoyed running Brickyard really comes down to one thing: Southern hospitality. “We tell campers we’re either related to you or we know you, so here, you are family”, Sykes said. “We want our guests to feel safe and cared for. We hope our specific system of greeting will immediately instill this.”
As the campers arrive on the campground, they are greeted by name and by a park host and escorted straight to their site. Once they are settled in, the campers are taken to the office in the limo golf cart to register. While there, the guests are welcomed again by Sykes or her friendly staff. The Sykeses do this because they have found that the guests like to meet the owners.
Campers are given a welcome packet, which includes a site map, information about the park and a list of area attractions along with a “southern style” hand fan, a cardboard fan on the end of a stick. Sykes said that guests immediately start to fan themselves with it, which brings up fond memories about the South.
Being that many campers arrive at the park tired and sometimes frustrated, according to Sykes, it is crucial that the first person they see gives them the warmest greeting and the best customer service possible.  “The first person they encounter will have real impact on the outcome of their stay”, Sykes said. “By the time our customers get to the office, they are rested and ready to chat.”
The 500-acre property has been in Debra Sykes’ family for five generations.
This family-owned business was started back in 1979, by Debra’s parents, Billy and Lillian Clark. In addition to the golf courses and campground sites, the property includes a working farm.
Debra Sykes has been in the camping industry for a number of years. She has noticed that campers fall into three groups: those wanting a natural setting, those looking for a low rate and those looking for a specific experience. “The newer campers want no surprises, so they seek a strong, recognized brand”, Sykes said. “They know they can expect quality when they pull up to a KOA.”
The Sykeses looked around at other partnerships, but found that KOA was the best. It matched what they were looking for as far as their high standards were concerned.
Sykes believes that with golf, guests at Americus KOA and Brickyard Plantation can enjoy a unique experience that other KOA campgrounds would not be able to offer. “Most KOAs have a focus or a draw … some with lakes, some with national parks. Our draw is golf”, Sykes said. “Here at Brickyard and Americus KOA, we offer regular traditional ball golf and we’ve also added foot golf and disc golf.”
For those who aren’t interested in golf, on-site fishing is available, along with paddle boating and sites to set up tents. Sykes went on to say that they will soon be adding some cabins this year.
As a result of Brickyard Plantation’s partnership with KOA, residents of Sumter County, as well as those coming from out of town, will have a top-notch experience when they visit Brickyard Plantation, the Americus KOA.