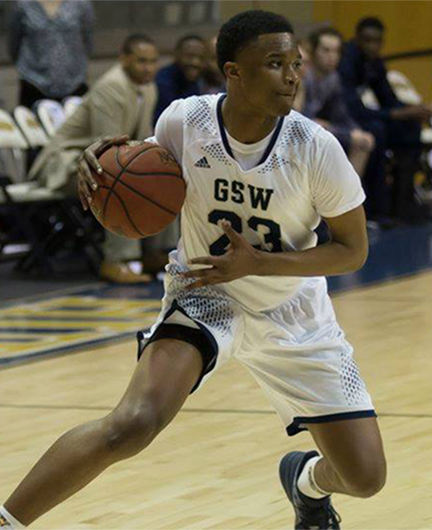 COLUMBUS – The GSW Men’s Basketball Team nailed a season-high fifteen three-pointers to lead them to a 95-78 victory at Columbus State Wednesday night, February 7.

The win completes a season sweep by the Hurricanes over the Cougars.

The Hurricanes went 15 of 25 from beyond the arc. That’s the team’s best three-point shooting performance in a PBC game in GSW history.

The Hurricanes improve to 12-8 overall and still have six Peach Belt Conference games left on the schedule. They are currently 8-8 in the PBC. The Cougars have now lost four in a row. They fall to 6-13 overall and 6-10 in the PBC.

Andre Statam hit three shots from beyond the arc in the opening 4:19 to put Georgia Southwestern State in front 12-4.  Jason Weaver hit a three-pointer for the Hurricanes with 6:48 to go in the first half. Weaver’s three-pointer was the seventh three-pointer hit by GSW in the first half at that point. By this time, GSW had a 31-14 lead over the Cougars. Columbus State was able to cut the margin to 38-27 by halftime.

Columbus State made one last run to cut the margin to four points by the 7:38 mark of the second half. However, the Hurricanes scored 11 times on 12 of their next offensive possessions to seal the victory.

GSW played the majority of this game without a big man, due to Hasaan Buggs getting into foul trouble. Buggs was limited to 12 minutes of action, but was able to tie for the game-high with five assists.

Five Hurricanes scored in double-figures. R.J. Sessions led GSW with 22 points. Jason Weaver and Andre Statam each scored 18 points, and both John Mason and Dajion Macklien each scored 11 points in the winning cause. For Weaver, his 18 points was a career-high for him.