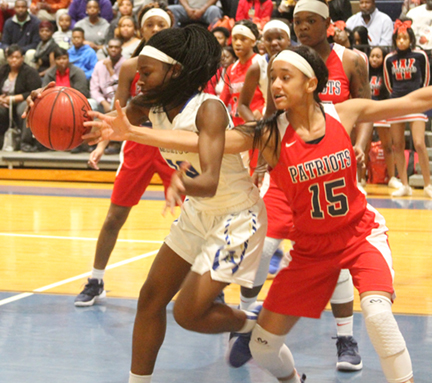 AMERICUS – Americus-Sumter senior guard Jykiera Long rose to the occasion. She led the Lady Panthers on a 13-0 run in the fourth quarter, which proved to be the turning point in Americus-Sumter’s 53-47 region semifinal win over Westover Thursday night, February 8, at Americus-Sumter High School.

“We were a little shaky in the first half, but we always start out slow”, ASH Head Coach Sherri Harris said. “Jy stepped it up in the second half and our defense won us the game.”

Long led Americus-Sumter in scoring with 25 points. As for Westover, they were led in scoring by Jasmine Jenkins with 15 points.

In the first few minutes of the second quarter, both teams played evenly. Then Westover went on a 9-5 run to close out the first half with a 24-18 lead. 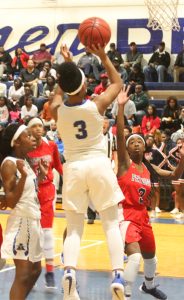 The Lady Patriots extended their lead early in the third quarter. However, Americus-Sumter went on a 6-0 run before Westover called timeout with 2:58 to go. At this point, Westover led 32-28. Both teams traded baskets, with Westover still leading 34-30. However, Americus-Sumter outscored Westover 7-4 in the closing minutes of the quarter. By the beginning of the fourth quarter, Westover’s lead had been trimmed to one point at 38-37.

The Lady Patriots increased their lead back to four points in the fourth quarter at 42-38. At that point, Long and the Lady Panthers went to work. They scored 13 unanswered points to take a 51-42 lead. Westover scored the next five points, but that would be as close as they would get as the Lady Panthers were victorious by the score of 53-47.

With the win, third-seeded Americus-Sumter (21-6) advance to the Region 1-AAAA Championship. They will face one of the best teams in the state, the Carver Lady Tigers (24-1). Tip-off is scheduled for Friday, February 9, at 7 p.m. at Americus-Sumter High School.