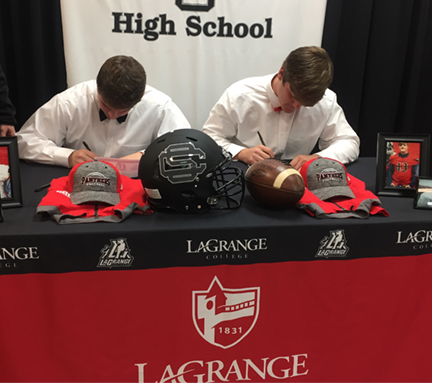 “They are probably the backbone of what we try to do”, Schley County Head Football Coach Darren Alford said. “I came here two years ago, and both these guys started as freshman. They were on the team that was 0-10 the year before we got here. They made a commitment to the weight room. They made a commitment to do what’s right in school. They’re probably the backbone of what we accomplished last season by getting to the second round of the playoffs.”

In 2017, the Wildcats went 8-4 overall and 3-2 in region play. They made it to the second round of the playoffs before losing to Mitchell County 22-21. “Everybody knows that the line of scrimmage is the most important part of the game”, Alford said. “These two guys have put that together and they were really, really good up front for us this year. It’s going to be hard to replace them, but we’re glad that they’re moving on and have the opportunity to go to college and get a better education.”

Both Montgomery and Rodgers will be playing on the defensive line for LaGrange. Rodgers, who played defensive tackle and left guard for the Wildcats, was also recruited by Point University and Alma College in Michigan, but chose to play for the Panthers. He will be majoring in History and would like to be a teacher. “When we went there, we liked the atmosphere. It was just that they were really competitive”, Rodgers said. “Everybody was like a family. That’s what made me decide to go there.”

Wayde Montgomery started off the 2017 season playing nose guard, but then switched to defensive end near the end of the season. He also played right guard on the offensive line. Montgomery chose LaGrange over Point University and Berry College. As far as academics is concerned, Montgomery wants to study Pre-Med and get his degree in Biology.

Several family members, along with the Schley County Football Team, were there to share in the special moment for the two players. One of the members of the football team present was Senior Tight End Christian Arnett. “They’re amazing teammates”, Arnett said. “They were great leaders for us…always picked us up when times were tough. They did a lot for us. I enjoyed playing on the line with them. I wouldn’t want to play with anybody else.” Before Rodgers and Montgomery signed their letters of intent, Coach Alford wanted to address the families of the players and express to them what Rodgers and Montgomery have meant to the Schley County program. Before that, he first addressed Rodgers and Montgomery directly. “I’m proud of y’all. I’m proud of what you’ve done”, Alford said. He then addressed the players’ families. “These families that are representing these young men, y’all have some great, great young men”, Alford said. “I’m really proud of what they’ve done. They’ve made my job easy and it’s been an honor and a privilege to be able to coach your children.”

Alford went on to say that both Rodgers and Montgomery will accomplish the things that are more important than football. “They’ll get a degree. They’ll do the right thing” Alford said. “They’ll grow up and they will do what I always tell them to do: football is not the most important thing. These two men will be great fathers one day. They’ll be great husbands, and they’ll be great community members. That’s what we want. That’s the reason that we do this.”

With that, Rodgers and Montgomery signed their letters of intent to play at LaGrange.