Grandson of Americus couple wins “Quarterback of the Year” award 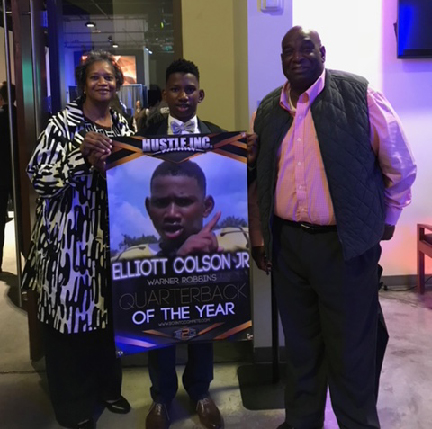 Elliot Colson Jr. (middle) with picture won the Quarterback of the Year award for the Ten-Year-old division of the State of Georgia. To his left, his grandmother, Linda Colson. To his right, his grandfather, Jimmy Colson

ATLANTA – Elliot Colson Jr., grandson of Mr. and Mrs. Jimmy Colson of Americus, was named Quarterback of the Year for the state of Georgia at the Born to Compete Award Gala in Atlanta on Sunday, February 11. Born to Compete is a youth sports organization that promotes competition in several different sports throughout Georgia and other parts of the country.

“The award was the Quarterback of the Year award for the ten-year-old division in the state of Georgia”, Elliot Colson Sr. said.

Elliot Colson Jr. is a fifth-grade honor student at Byron Elementary School in Byron, GA. He led his 10u football team, the Warner Robins Raiders, to an undefeated season and the Georgia Youth Football Conference (GYFC) Championship.

“It’s just awesome to win the award”, Elliot Colson Jr. said. “Before the season, I came in with a fractured elbow. I couldn’t play my first game. I couldn’t start the first three games. It was just, like, I didn’t think I was going to be able to, like, just come back from that.”

However, Colson didn’t allow the adversity he experienced before the season keep him from making his return to the field. “I kept putting in the work. My team helped me. My coaches helped me. We came out with an undefeated season and won our championship.”

According to Jimmy Colson, Elliot’s grandfather, Elliot played on an AAU football team that played games all across the state: in Warner Robins, Byron, and as far north as the Atlanta area. “We learned that he was one of the nominees to come up, so quite naturally, we went up with him. We didn’t know what to expect”, Jimmy Colson said.

At the gala in Atlanta, the Keynote speaker was University of Georgia Offensive Coordinator Jim Chaney. According to Jimmy Colson, Chaney had a whole lot of great things to say to the young football players gathered at the gala. As far as Elliot Colson Jr.’s family is concerned, they couldn’t be prouder, not just because he won the award. “He does well in school. He’s in the church. He’s a great kid. We’re so proud of him”, Jimmy Colson said.