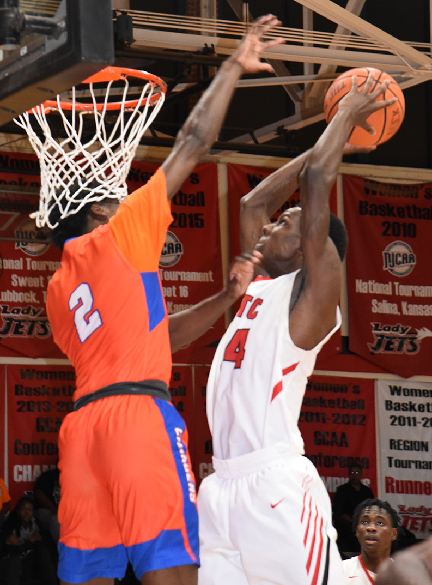 AMERICUS – The Lady Jets, ranked atop the GCAA standings, led by just one point at halftime, but took control in the second half defeat Georgia Highlands College 70-43. It was the opening game of the alumni/sophomore day festivities, celebrating the 70th anniversary of South Georgia Technical College.

With the win, the Lady Jets (23-5, 15-1) have clinched their third GCAA regular season conference title. Having won the regular season title, they will host the semifinals and the finals of NJCAA Division I Women’s Region XVII Tournament Friday and Saturday, March 1-2. 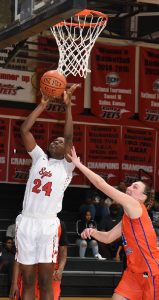 Sophomore Esther Adenike goes up to score against Georgia Highlands.

The first half of the men’s game was a hard-fought half, with the Jets up 40-38 at halftime. However, Georgia Highlands found a way down the stretch to edge out the Jets 82-80.

Sophomores Rico Simmons and Marquel Wiggins each scored 19 points to lead the Jets. Wiggins had a double-double, as he pulled down 12 rebounds on the day. Sophomore Mike Boone was also in double-figures, scoring 18 points.

The loss drops the Jets from second to third place in the GCAA standings. As long as they finish in the top four spots of the GCAA standings by the end of the regular season, they will host a first-round playoff game. The men’s quarter-finals will begin on March 6th, with the semi-final and final round to be played at the top-ranked seed’s home court on March 9th and 10th.

Both the Jets and Lady Jets will be home Wednesday, February 14th, against Atlanta Metropolitan College. Tip-off for the Lady Jets’ game is at 5:30 p.m., followed by the Jets at 7:30 p.m.