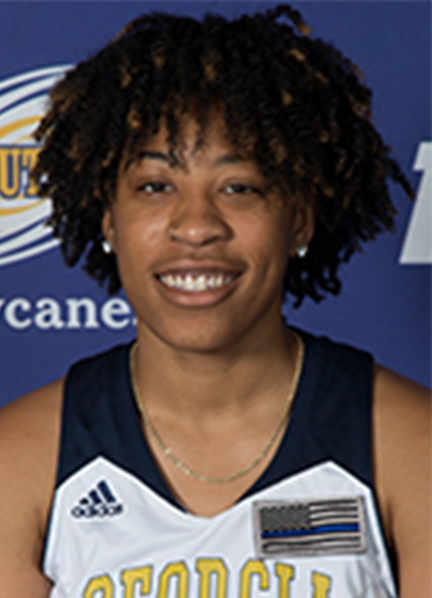 AIKEN, SC – The Georgia Southwestern State Lady Hurricanes had three players to score in double figures: Tamecia Blue, Kris Beckham and Mariya Trimble. However, they still went down to defeat to the Lady Pacers 59-54 on Saturday, February 10.

Kyrie’ Chandler led the Lady Pacers with 18 points. USC Aiken improves to 6-17 overall and 3-14 in the PBC.

GSW fell behind early 20-8, making just three shots from the floor in the first quarter. Meanwhile, the Lady Pacers shot 8 for 14 (57.1 percent).

The Lady Canes took control in the third quarter, starting with a three-pointer by Tamecia Blue. This led to a 13-2 GSW run over the first 7:32 and a six-point lead. USC Aiken got a three-pointer from Sade Johnson with 2:02 left. At that point, neither team scored the rest of the quarter, and the Lady Canes led 41-38 to start the fourth.

However, the deciding turning point of the game came in the fourth quarter, when USC Aiken went on a 10-2 run. This was something GSW couldn’t overcome. GSW briefly had the lead 50-49 when Mariya Trimble made two free throws with 3:05 to go. However, USC Aiken responded with a three-pointer by Kyrie’ Chandler. The Lady Pacers were able to make some free throws over the final two minutes to seal the win.

Mariya Trimble was one rebound short of recording her third-straight double-double. The Lithonia, GA native finished with 11 points and nine rebounds, along with three assists.

Tamecia Blue had six steals to go along with 10 points.