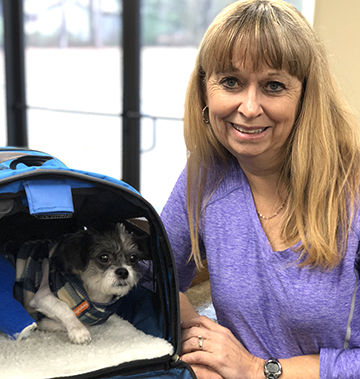 AMERICUS — Ozzy, the year-old dog abandoned at the Sumter Humane Society on Dec. 30, in horrible condition, returned home on Friday after undergoing orthopedic surgery at the veterinary teaching hospital at Auburn University.
Ozzy wasn’t feeling his usual perky self after having a plate and screws implanted into his right hind leg. When Ozzy was first discovered at the shelter, it was only after his filthy, matted hair was shaved, that the old injury to his Achilles tendon was found.
The surgery, which cost approximately $4,000, was a daunting obstacle at first, but after the animal lovers of the community got word of Ozzy’s predicament through a story published in this newspaper, almost $6,000 was raised. Word spread fast on Facebook as well.
Olson commented Friday, “We always hear about the people who don’t care about their animals, but Ozzy’s case proves how many people in Americus and Sumter County love animals and are willing to lend a helping hand.”
Olson said that Ozzy has a six-week recovery period ahead of him, and then he will be adopted into his forever home.