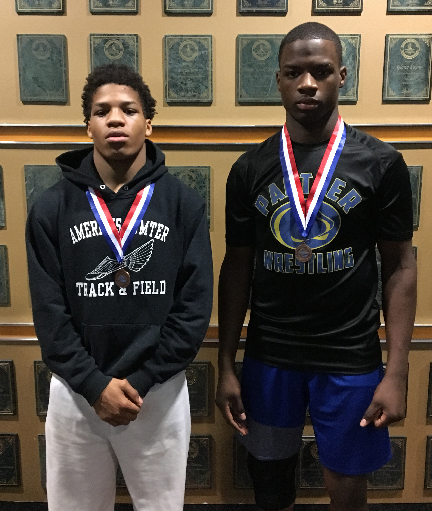 Montrellis Wilson was able to place fifth in the state in the 145-lb. Weight Class. Wilson earned fifth-place by defeating Courtland Staples of Northside Columbus (34-8). Wilson, a junior, finishes his season with an overall record of 27-6. Wilson lost his first match to Chris Camacho of Marist (25-10) by a 7-5 decision. However, he bounced back to win his next three matches. He defeated Chase Calvert of Gilmer (23-22) in a 9-3 decision. Wilson followed that up with a sudden victory over Stanley Lowe of Mary Persons (32-8) by the score of 12-10. Wilson then pinned Tavaress Smith of Baldwin County (31-8) to win his third-straight match. Wilson then had to face Jefferson’s Cory Strong (42-1). Wilson was pinned by Strong in that match. This set up the match for fifth place match against Staples. Wilson was able to win in an ultimate tie breaker by the score of 7-6.

In the 182-lb. Weight Class, Henry Wilson Jr. had a solid tournament as well, finishing in sixth place. Though he lost his opening match to Jaylen Odom of Burke County (23-7) by getting pinned, Wilson bounced back to win his next three matches. He pinned Evan Katz-Gathercole of Woodward Academy (9-13) to win his first match. Wilson followed that up with a win over Zeke Taylor of Perry (28-8) by injury default. He then won his third-straight match by pinning Jaxson Hoetzel of Madison County (36-18).

This put Wilson into the Consolation Semifinals. However, he was pinned by Jonathan De La Cruz of Cartersville (44-4). This put Wilson in the match for fifth place in the 182-lb. Weight Class against Tyler Beard of Lafayette (43-8). However, Beard pinned Wilson to win fifth place. Henry Wilson Jr., a junior, finishes the season in sixth place in the state in the 182-lb. Weight Class. He finishes the season with an overall record of 22-11.