Fifth-Inning balk the difference in Wildcats’ loss to Shaw 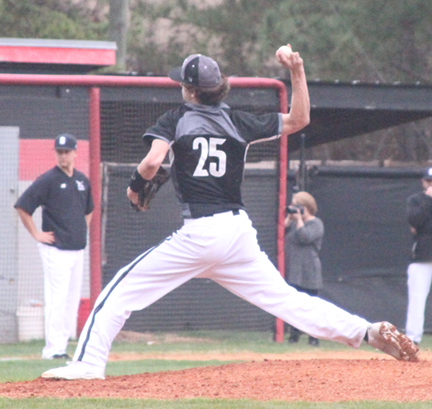 Schley County Pitcher Ashton Goodin in action. He went 3 for 4 at the plate and drove in two RBIs.

COLUMBUS – With the scored tied 8-8 in the bottom of the fifth inning, the Shaw Raiders had a runner on third base. A balk call against Schley County pitcher Trent Bivins resulted in the runner at third scoring. It turned out to be the difference in the ball game as the Wildcats lost their season opener to the Raiders 9-8 at Shaw High School Thursday night, February 15.

It was the second balk of the game called against Schley County, and it was a costly one.

The umpire called a total of three balks in the game: two against Schley County and one against Shaw. The Wildcats had a chance in the top of the sixth inning to tie the game. However, Lorne Barrineau and Garrett Peavy both grounded out, and Logan Wurtz struck out. At that point, the umpires ended the game due to darkness, giving the Raiders the win.

“We knew coming into the season that we were going to hit the ball a little bit”, Schley County Head Coach Chuck Cheek said. “our guys swung the bats pretty well. Everything that we struggled with today had to do with little things, things having to do with attention to detail. The good news is that we can clean it up. Those are things we can get better at.”

Ashton Goodin, who started the game pitching for the Wildcats, had a good day at the plate. Goodin went 3 for 4 and drove in two RBIs. Goodin had a tough day on the mound, however. He surrendered four runs on two hits in two innings of work. He struck out one and walked one. The Wildcats scored two runs in the top of the first. Jordan Hall led off with a walk and advanced to second on a balk call against the Shaw starting pitcher Owen Lakeman. Wade Law drove in the first run of the game. Cameron Belcher reached on a single, then Goodin drove in a run on a double to give the Wildcats a 2-0 lead.

However, the Wildcats exploded in the top of the third, scoring five runs on four hits. Ashton Goodin led off the inning with a single. After Trent Bivins struck out, Lorne Barrineau singled. Garrett Peavy and Dakota Albritton both drew walks. Jordan Hall then singled, followed by a fielder’s choice RBI by Chance Hollomon. The Raiders went down in order in the bottom of the third. At this point, Schley County had a 7-4 lead.

Schley County loaded the bases in the top of the fourth, but couldn’t drive any runs home. The Raiders scored four runs in the bottom of the fourth, most of them coming on a three-run home run by Marquand, his second of the game.

Wesley Johnson led the inning off for Shaw grounding out. Then Jagger Smith reached first by being hit by a pitch by Bivins. Marquand was intentionally walked, moving Smith to second. Kaleb Podger then grounded out, moving Smith to third. There were runners at second and third with two outs. At this point, David Willie was the batter for the Raiders. As Trent Bivins was getting ready to pitch to Willie, the umpire called a balk on Bivins, scoring Smith. Willie flew out to end the inning, but Jagger Smith’s run on the called Balk proved to be the winning run for the Raiders. “We’ve got about a week before we play again, so we are going to get some really good practice in and try to get some things cleaned up”, Coach Cheek said. “Hopefully will get better from this.”

The Wildcats will try for their first win when they play their first region game at Hawkinsville on Friday, February 23. First pitch is scheduled for 5:30 p.m.