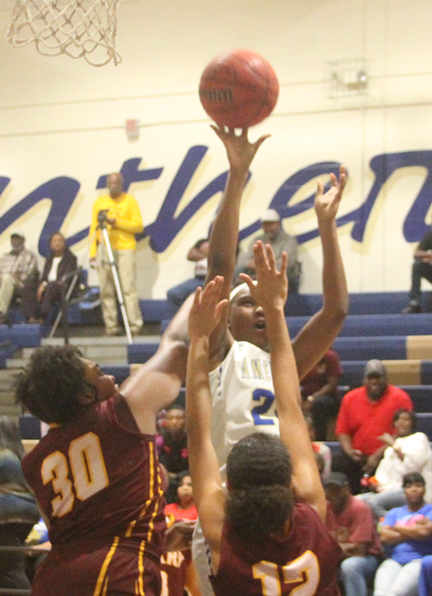 Americus-Sumter’s Brianna Pope (white) goes up for a rebound against several Perry players.

AMERICUS – Americus-Sumter senior guard Jykiera Long led the Lady Panthers on a 12-2 run early in the game. This was something the Perry Panthers (10-17) could not recover from, and Americus-Sumter (22-7) went on to a 54-32 win in the first round of the GHSA Class 4A State Tournament on Friday, February 16, at Americus-Sumter High School.

“We executed in our half-court offense”, ASH Head Coach Sherri Harris said. “We made a couple of adjustments at halftime, but overall, I thought we did a good job of running our offense. We played pretty good defense. We only fouled four times in the second half. Anytime we’re not putting people on the free-throw line, we have a chance to win.”

“We did good. We played hard in all the quarters”, Jykiera Long said, “We didn’t back down and we came out with a win.”

The panthers got off to a strong start as Deasia Ford scored the first four points of the game. At that point, the Panthers went on a 12-2 run spearheaded by Long. The Perry Panthers didn’t score another point until a free throw was hit with a little over two minutes to go. However, Perry was able to get a fast-break basket by Asjah Harrell, cutting the lead to 16-5. With 22.8 seconds to go, Brianna Pope was fouled, but missed both free throws. The quarter ended with Americus-Sumter leading 16-5.

Ford scored for the ASH Panthers to start the second quarter. Perry continued to struggle against the defense of Americus-Sumter and committed turnovers. Brianna Pope was dominating the glass in the first half, and she got a rebound and scored with a little over six minutes left in the half. Perry continued to struggle offensively in the second quarter. They had only scored two points in the second quarter until Asjah Harrell hit a three-pointer, making the score 23-10 ASH. However, Perry cut the lead to 10 on a three-pointer by Lameshia Tucker with about three minutes left in the half. Long scored with 1:56 to go in the half, but Harrell answered for Perry, and the ASH lead remained at 25-15. As the first half wound down, the Lady Panthers held the ball for the last shot, and Long hit a three-pointer as the horn sounded to end the first half. Americus-Sumter led at halftime 28-15. Jykiera Long scored 11 of her game-high 18 points in the first half. The defense of Americus-Sumter was so good that they only allowed the Perry Panthers to make it to the foul line twice during the first half. Perry went 1 for 2 from the line in the half.

Perry scored the first points of the second half on a layup by Davina Brown. Then things got a little nervous for ASH as Tucker hit another three-pointer, cutting the Lady Panthers’ lead to 28-20. Neither team knew it at the time, but that would be as close as Perry would get for the rest of the game. The short run by Perry prompted Sherri Harris to call timeout with 5:06 left in the third quarter. Americus-Sumter struggled to score and committed some turnovers. They didn’t score in the second half until Brianna Pope scored with 3:45 to go in the third. At this point, ASH led 30-20.

With under 20 seconds left, ASH held for the last shot. However, Long lost her dribble and was unable to get off a last shot. ASH led 35-23 to start the fourth quarter. Nyja Carson scored the first points of the fourth quarter, giving ASH a 37-23 lead. Then Deasia Ford scored and was fouled. However, Ford missed the free throw, and ASH led 39-23. Carson scored again with under six minutes left, increasing the Lady Panthers’ lead to 18. Carson scored another basket, putting ASH up 43-23 with a little over five minutes left.

Perry was never able to cut into the Lady Panthers’ double-digit lead. Americus-Sumter’s defense limited Perry’s opportunities to score, and the Lady Panthers would advance in the tournament with a 54-32 win.

Americus-Sumter will play the winner of Burke County and North Clayton either Wednesday, February 21, or Thursday, February 22. Location and time are to be determined.