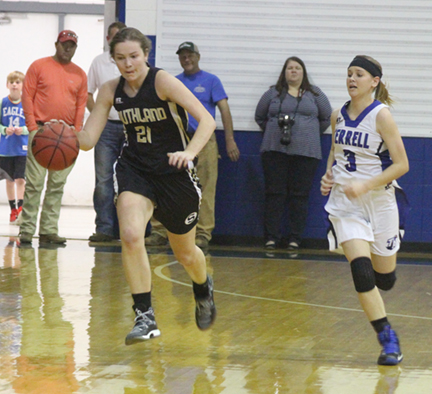 AMERICUS – They had beaten Brookwood in the previous week. However, this was the region tournament. The Warriors came to play and they shut down Southland’s offense on their way to a 53-27 victory over the Lady Raiders Thursday, February 15, at the GSW Storm Dome.

Southland, the number one seed in the tournament, could only score four points in the first quarter, while the Lady Warriors put up 14.

The Lady Raiders continued to struggle offensively in the second quarter. Brookwood outscored Southland 16-4 to take a 30-8 halftime lead.

The Lady Raiders continued to be cold from the field in the second half. They also committed numerous turnovers. After three quarters of play, Brookwood maintained a 42-20 lead.

Southland’s hopes of a miracle come-from-behind victory in the fourth quarter were dashed as the Lady Warriors dominated the rest of the game. Brookwood held Southland to just seven points in the final quarter.

“It’s one of those days where you have a game where you get beat at everything”, Southland Head Coach Ty Kinslow said. Macy Williams and Sydney Payne led Southland in scoring with six points a piece.

The Lady Raiders will play in the consolation game Friday, February 16, at 4 p.m.