Jets and Lady Jets Coast to wins over Atlanta Metro 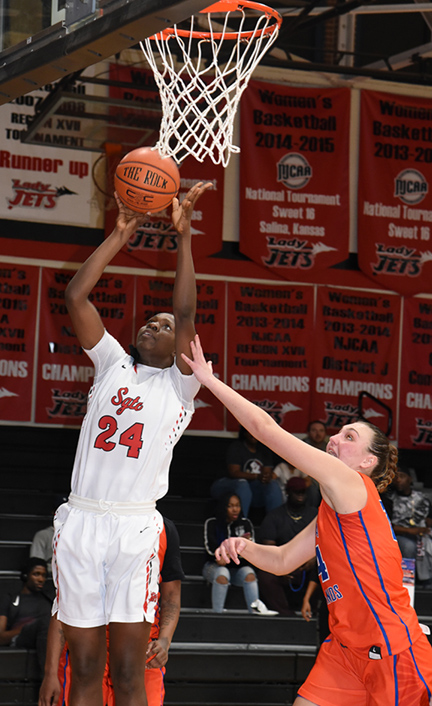 AMERICUS – Both the South Georgia Tech jets and Lady Jets got victories over Atlanta Metropolitan College Wednesday night, February 14. The Lady Jets, who sit atop the GCAA Division I standings, won going away 80-56. The Jets followed that up with a lop-sided victory of their own, defeating Atlanta Metro 100-74.

As a result of the Jets’ win, and South Georgia State’s 107-85 loss to Georgia Highlands, the South Georgia Tech Jets move back into second place in the GCAA Division I standings.

As for the Lady jets, they have clinched the GCAA Division I regular season championship and will host the NJCAA Region XVII Tournament semi-finals and finals on March 2 and 3. The winner of the region tournament will advance to the District J Championship play-in game. The winner of that game will advance to the NJCAA National Tournament in Lubbock, Texas.

The Lady Jets went to the national tournament during the 2016-2017 season. It was the program’s fourth appearance in the national tournament. They finished among the top 16 teams. Head Coach James Frey would like to see his squad qualify for the NJCAA National Tournament for the second consecutive year and the third time in four years.

“We are still playing up and down”, Frey said. “If we play up to our potential for a full 40 minutes, we can play with anybody. We are just not there yet, but now we have a 10-day break before our next game and last regular season match-up against Albany Tech. We need to stay focused and work hard. Once the tournament starts, everything else is in the past. You have to win to keep playing.”

South Georgia Tech’s Sam Matice had a double-double, scoring 12 points and grabbing 12 rebounds in the win over Atlanta Metro. Photo by SGT

The Jets, who defeated Atlanta Metro 100-74, had six players in double-figures. Two of them had double-doubles. Sophomore guard Rico Simmons and freshman forward Dominique Walker both led the Jets in scoring with 14 points each. Walker also had 11 rebounds. Sophomore forward Marquel Wiggins and freshman forward Adonis Green both scored 12 points. Wiggins also had 12 rebounds and one steal. Freshman Sam Matice started for the Jets and scored 11 points. He also had eight rebounds. Freshman guard Duran Green was also in double-figures. Green scored 10 points, had two rebounds and two assists.

South Georgia Tech built a 50-32 lead by halftime and was up by as much as 29 points in the second half against the Trailblazers.

The jets will host South Georgia State on Wednesday, February 21, at 7 p.m. This game will determine second place in the conference. Both teams will travel to Albany on Saturday, February 24, to take on Albany Tech. The Lady Jets tip off at 2 p.m., followed by the Jets at 4 p.m.