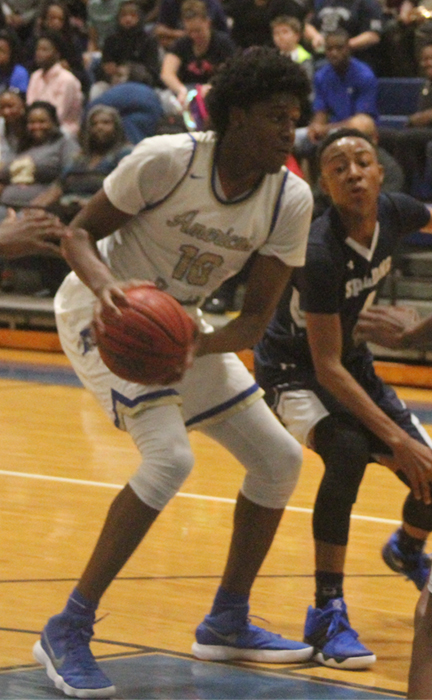 Americus-Sumter (25-3) was able to take over the game using their intense full-court pressure and defense. They forced the Jaguars into several turnovers and turned them into points.

“We started off real slow. It wasn’t anything they were doing. I think we were just missing a bunch of shots. Our offense was executing”, ASH Head Coach Michael Hoffpauir said. “We were forcing turnovers. We were getting rebounds. We were getting out and running, but it seemed like there was a lid on the basket. We couldn’t get the ball to go in. We knew our defensive pressure and intensity would keep going in the second half. Everything would turn in our favor and it did.”

The Panthers had three players in double-figures. Eric Hall led the way with 18 points, Joshua Lusane scored 12 and Traveon Brown scored 10. Sh’Qual White also chipped in eight points in the winning cause. Spalding (11-16) was led in scoring by Philip Richards with eight points.

“We knew we were going to have to come out and play hard. We couldn’t underestimate anybody”, Eric Hall said. “Their team (Spalding) was going to come out and give us their best. We came out slow in the first half, but our coach told us to get it together…come out and put the ball in the hole. After halftime, we got it going. Our home-court advantage really helped us out.”

The Panthers used full-court pressure in the third quarter to force Spalding into turnovers and turn them into points. They went on an 8-3 run during the first three minutes of the third quarter. However, the Panthers turned the ball over with a little over 4:30 to go in the third, and Spalding’s Zion Puckett drove to the basket, scored and was fouled. He made the three-point play, cutting the lead to 29-19.

However, Eric Hall nailed a three-pointer to put the Panthers up 32-19. This sparked Americus-Sumter’s offense. The Panthers went on an 8-4 run, capped off by a basket from Derrick Wofford to give the Panthers a 17-point lead at 40-23. Wofford then scored another basketball and was fouled, However, he missed the free throw. The Panthers continued their swarming defense, causing the Jaguars to turn the ball over. By the end of the third quarter, ASH led 42-25. They had outscored Spalding 21-12 in the third quarter.

To start the fourth quarter, the Panthers continued their pressure defense. They forced Spalding into committing several turnovers, and they turned those turnovers into fast-break points. By the 6:53 mark, Spalding head coach Joseph Wilder called timeout with ASH up 48-25.

The timeout didn’t do much for the Jaguars, as the Panthers continued to full-court press and force turnovers. Spalding could do nothing offensively due to the defensive pressure of the Panthers. With five minutes left in the game, the lead was 55-25. The Panthers had gone on a 13-0 run to start the fourth quarter. With a little over four minutes to go, Joshua Lusane dealt a two-hand slam, electrifying the crowd. There was no doubt about the outcome, only the final score.

The Panthers continued to score at will, and by the 1:54 mark of the game, ASH was up 64-32. Then with 44.7 seconds left, Marcus Lusane, Joshua’s brother, scored on a layup, exciting the crowd and giving ASH a 66-32 lead. Spalding got in one free throw before the game ended, but Americus-Sumter would win 66-33.