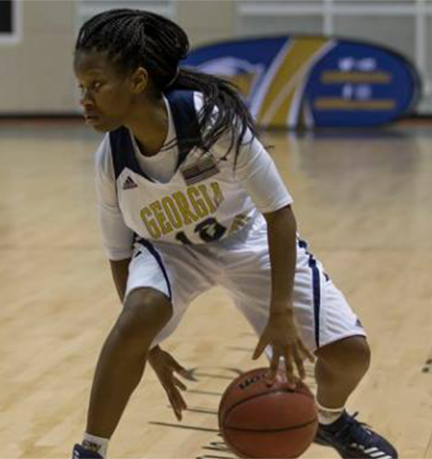 Mariya Trimble had her sixth-straight game scoring in double-figures and her fourth double-double of the season. Trimble scored 24 points and had 13 rebounds to lead the Lady Canes to victory.

With the win, GSW improves to 8-16 overall and 5-15 in the Peach Belt Conference. It was the final home game for Gabby Figgers, Brittany Grant and Shanya Jones. Augusta University drops to 4-20 overall and 2-18 in the PBC.

The first quarter was a back-and-forth affair with three lead changes. Neither team had a bigger lead than three points. The Jaguars, however, had a one-point lead at the end of the first quarter. Both Gabby Figgers and Brittany Grant each knocked down a three-pointer in the quarter.

Both teams struggled to score in the third quarter, as GSW outscored Augusta 11-10. However, the Lady Canes grabbed 15 rebounds and forced Augusta into committing seven turnovers. As a result, GSW took an eight-point lead into the fourth quarter.

Tyra Smith came off the bench and gave GSW some energy, scoring on back-to-back layups to make it a double-digit lead get the Storm Dome crowd into the game. Then Brittany Grant knocked down a three-pointer to give the Lady Canes a 15-point lead. This ultimately put the game out of reach. GSW extended their lead to 18 before Augusta cut it to nine in the final minute. However, that would be as close as Augusta would get.

The Lady Canes hit the road for their final road trip as they will take on Clayton State Wednesday night, February 21. Tip-off is scheduled for 5:30 p.m.