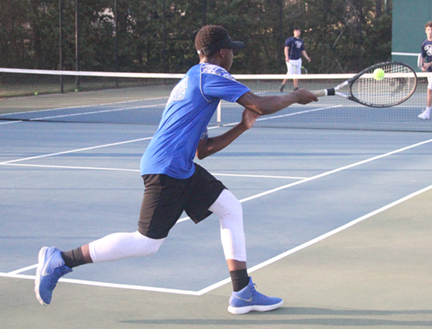 Americus-Sumter’s Keldrick Flemming in a doubles match with his partner Weston Wooden. They were defeated 4-6, 0-6 by Jackson Knight and Aiden Robinson of Taylor County.

On the girls’ side, they were blanked by Taylor County 5-0. “We had to get our feet wet today. This was our first match of the season,” ASH girls coach Terri Lee said. “We were trying to figure things out today and we’ve got some things to work on.” In doubles action, the Panthers’ team of Keldrick Flemming and Weston Wooden lost to the Vikings’ duo of Jackson Knight and Aiden Robinson 4-6, 0-6. Aaron Lewis and Chandler Redix of ASH also fell in straight sets to Jacob Peed and Patrick Harrington 0-6, 1-6.

Both the Americus-Sumter boys and girls’ tennis teams will try to rebound when they host Cairo on Thursday, February 22, at 4:30 p.m.