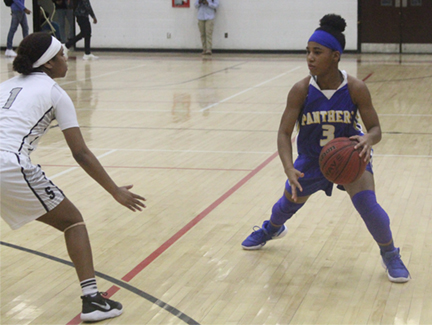 Waynesboro – The Americus-Sumter Lady Panthers (23-7) traveled four hours Wednesday, February 21, to Waynesboro, GA to take on Burke County in the second round of the GHSA Class 4A State Tournament. Their defense shut down the Lady Bears and they left Waynesboro with a 39-25 victory.

According to Americus-Sumter Head Coach Sherri Harris. Outstanding team defense was a big reason for the win. Harris singled out Brianna Pope for her effort on the offensive end in the winning cause. “Pope played her best offensive game all season, very aggressive,” Harris said.

Both Jykiera Long and Shidajah Johnson led the Lady Panthers with 10 points. Brianna Pope scored nine points and DeAsia Ford had eight. Ford led the Lady Panthers in the rebounding category with eight total rebounds. Brianna Pope was also active on the glass, grabbing five total rebounds. Nyja Carson led Americus-Sumter in the assist category with five assists. She also had three steals. However, Shidajah Johnson led Americus-Sumter in the steals category with five. Johnson also had four rebounds to go with her 10 points and five steals.

Burke County (18-7) was led in scoring by Kianni Westbrook with eight points. The Lady Bears were the number one seed out of Region 3 AAAA. They defeated North Clayton 57-44 in their first-round game.

The Lady Panthers will have to continue to be road warriors. They travel to Atlanta on Tuesday, February 27, to take on Marist in the quarterfinals. Tip-off is scheduled for 6 p.m.