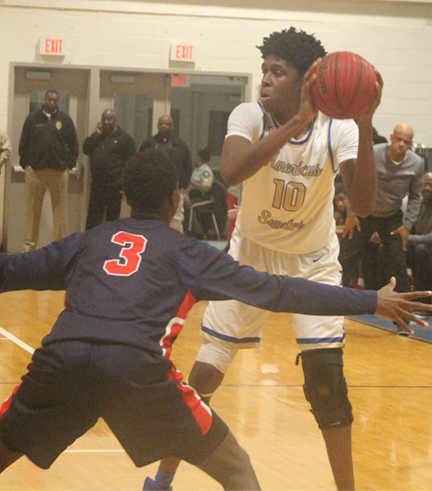 Americus-Sumter forward Joshua Lisane shown here against Westover in the region tournament two weeks ago. Lusane led the Panthers with 16 points in the 60-59 loss to Baldwin.

Milledgeville – Americus-Sumter had a 57-55 lead with 17.4 seconds left in the game, but Baldwin shooting forward Charles Ubah hit a three-pointer to give the Braves their first lead of the night and lead Baldwin to a 60-59 come-from-behind win over the Panthers in the second round of the GHSA 4A State Tournament on Thursday, February 22, at Baldwin High School.

The Panthers end their season at 25-4. What made the loss so heart-breaking was that the Panthers had a 40-29 lead going into the fourth quarter, but the Braves outscored Americus-Sumter 31-19 in the final frame.

“I asked my guys to leave everything on the floor and they did,” ASH Head Coach Michael Hoffpauir said. “We had a few costly turnovers that hurt us and allowed them to make a run. I’m very proud of the team effort. We put together a great season, and we will continue to work till we break through.”

The Panthers had three players in double-figures. Joshua Lusane led ASH in scoring with 16 points. Both Eric Hall and Traveon Brown scored 12.

The Panthers got out to a strong start in the first half, as they built a 13-8 lead. Then the Braves went on a 7-2 run to tie the game at 15-15. However, Americus-Sumter went on a 10-4 run to close out the first half. Both teams went to the locker room with the Panthers up 25-19.

The Panthers were able to build their lead up to 11 by the end of the third quarter, and led by as much as 15 in the second half.

However, with the Panthers up 44-33 in the fourth quarter, the Braves scored nine unanswered points. Joshua Lusane was able to stop Baldwin’s run with a jumper, giving the Panthers a 46-42 lead. From then on, both teams traded baskets, but Americus-Sumter maintained a 57-55 lead with 17.4 seconds left.

However, that’s when Charles Ubah struck for the Braves. Ubah hit a three-pointer to give Baldwin its first lead of the night at 58-57, but there was still time for the Panthers to retake the lead and get the win. However, the Panthers were called for an offensive foul, giving the ball back to the Braves with nine seconds left. The Panthers fouled right away, and Baldwin was able to make the free throws, increasing their lead to 60-57 with 8 seconds left. The Panthers tried a three-pointer to tie the game, but the shot hit the back of the rim. The ball was tipped in at the horn, but it was one-point short as Baldwin claimed the 60-59 victory.

Baldwin (23-6) advances to the quarterfinals, where they will take on the winner of Cartersville and Blessed Trinity.