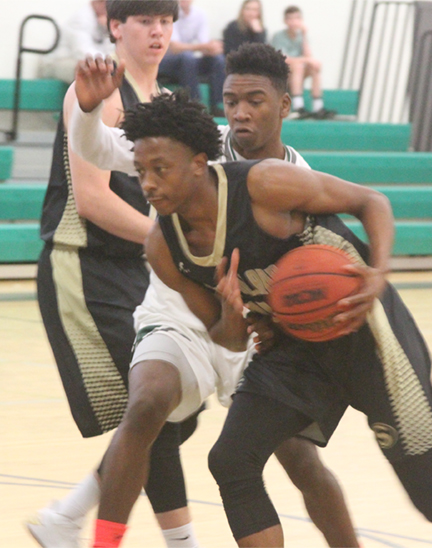 ATLANTA – Both Southland Academy and Frederica Academy made the long trip to Atlanta to play in the first round of the GISA AAA Boys State Basketball Tournament. However, the Raiders used a 9-0 run in the second quarter to help lead them to a 60-52 win over the Knights Wednesday night, February 21, at Holy Spirit Preparatory School in Atlanta.

Alex Roach and Saige Batten led the way for the Raiders. Roach led all scorers with 22 points and Batten had a double-double, scoring 21 points and grabbing 11 rebounds.

“We’re in the playoffs now,” Roach said. “All that really matters is getting the win and getting to the next round. We did everything that we had to do to get this win, so we’re looking forward to our game at GSW on Saturday.”

As for the first-round game, Southland Head Coach Rundy Foster was pleased with his team’s overall performance, in particular, the performance of two players off the bench. “I thought, off the bench, Parker Weldon and Hunter McCain did a good job on the offensive boards,” Foster said. However, Foster went on to say that his team showed some lack of aggressiveness in the second half. “I thought in the third quarter, when we had that bad stretch, we played to not lose. We didn’t do the things we were doing in the first half, so that’s why we turned the ball over. We were a little passive. We don’t need to be passive, especially on the offensive end. We need to stay aggressive.” Coach Foster was referring to a period in the third quarter during which the Raiders turned the ball over numerous times.

The game started out with Frederica taking a 7-2 lead before Harrison Bell nailed a three-pointer for Southland. At that point, the game went back and forth until Luke Law hit a three-pointer to give the Raiders a 14-13 lead late in the first quarter. The quarter ended with Southland up 16-15.

It was a run-and-gun affair in the early minutes of the second quarter. With Southland up 18-17, Frederica’s Jack O’Hara scored to give the Knights the lead. Southland regained a 20-19 lead, then Saige Batten scored to give the Raiders a three-point lead. With 3:11 to go in the first half, the Raiders crashed the glass and Parker Weldon scored to give Southland a 26-21 lead. Alex Roach then hit a three-pointer to increase the lead to eight, prompting Frederica Academy to call timeout with 2:28 to go in the half. Southland’s rebounding, particularly on the offensive end, was a key in their victory. The Raiders hauled down 30 rebounds for the game.

With under two minutes to go, Weldon scored again to give the Raiders a 31-21 lead. The Raiders continued to fight for offensive rebounds, getting second and third chances. Weldon was able to get a rebound and get fouled, but missed both free throws. However, with 18 seconds left in the half, the Raiders had the ball and held it for the last shot. Saige Batten dribbled until there were about five seconds left, then nailed a jumper to give the Raiders a 33-21 lead at halftime.

Alex Roach led the first-half attack for the Raiders, scoring 17 of his game-high 22 points in the first half.

The Raiders got off to a good start in the third quarter as Chandler Studdard scored to give Southland a 35-21 lead. The Raiders continued to move the ball patiently around the perimeter, as they had done in the first half. With 6:20 to go in the third, Saige Batten was fouled and made both free throws. At this point, the Raiders had a 37-21 lead. Batten scored again a minute later as he drove right through the Frederica defense and scored, giving Southland a 39-22 lead.

However, the Raiders committed a turnover, resulting in a Frederica basket by Tyler Pierce. This prompted Foster to call timeout to settle his club down. However, the Raiders turned the ball over again, and Jaylin Simpson scored for the Knights. This was part of a 6-0 run by Frederica, as Southland was struggling with committing turnovers.

Batten was able to stop the run as he drove the lane, scored, and was fouled. Batten couldn’t convert the three-point play, but the Raiders were up 41-28 with 1:38 left in the third quarter. With under a minute to go in the third, and the Raiders up 41-31, Alex Roach faked out his defender and hit a jumper, extending the lead to 43-31. That would be the score at the end of the third quarter.

The first few minutes of the fourth quarter were evenly played. However, with Southland leading 48-36, Parker Weldon was fouled, but missed both free throws. Fortunately for Southland, Batten was there for the rebound and put-back to give the Raiders a 50-36 lead with 3:30 left in the game.

With 3:23 to go, Coach Foster called a timeout. However, the Raiders committed another turnover as Harry Veal recorded a steal and scored on a fast-break basket for the Knights. At this point, Frederica had cut the lead to 50-40. Then Tyler Pierce of Frederica was fouled and hit one of two free throws, cutting Southland’s lead below double digits for the first time since the second quarter.

The Knights were unable to make a last-minute comeback, and Southland left Atlanta with a 60-52 victory. Frederica had two players in double-figures. Harry Veal led the Knights with 16 points and Jack O’Hara scored 11.