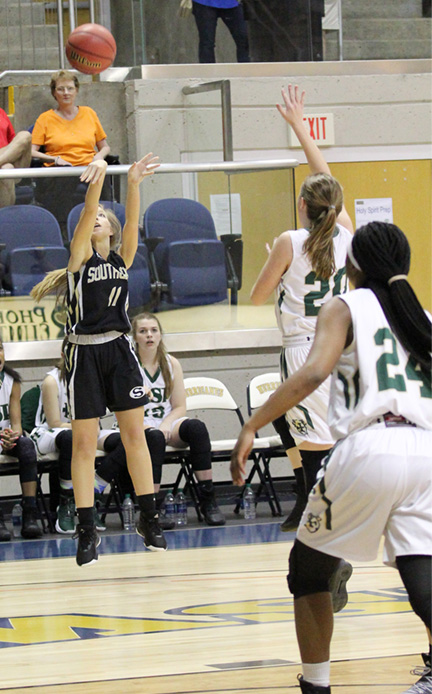 AMERICUS – The Southland Lady Raiders’ season came to an end Friday afternoon, February 23, at the  Storm Dome. Holy Spirit Prep forced the Lady Raiders into committing numerous turnovers on their way to defeating Southland 52-43 in the second round of the GISA AAA Girls State Basketball Tournament.

The Lady Raiders finish the season at 22-5. Southland had two players in double-figures. Macy Williams led Southland with 12 points and Savanna Banks had 10. “We got off to a bad start with some turnovers. That did hurt us early,” Southland Head Coach Ty Kinslow said. “We didn’t shoot the ball well. We knew they were a good guard-oriented team. Sometimes, that causes match-up problems. They made a lot of shots, a lot of threes. We made a couple of adjustments at halftime and then cut it to six twice. We did a great job of penetrating, dishing and getting it inside. We knocked one or two threes down late that got us back in the game, but it takes a lot of energy to recover. Then once you do that, it’s hard to maintain that.”

For five seniors, it was their last game as a Southland Lady Raider: Cassi Bass, Kathleen Kinslow, Sydney Hayes, Savanna Banks and Karleigh Werling. This was a group that led the Lady Raiders to a remarkable 22-5 season and to the second round of the state tournament.

Holy Spirit Prep jumped out to a 6-2 lead early in the first quarter. Then Macy Williams scored on the inside to cut the lead to 6-4. The Lady Raiders struggled with turnovers at times in the first quarter. By the 4:04 mark, the Lady Cougars led 8-4. After another basket by Holy Spirit Prep, Southland turned the ball over again. Jonnise Poole of HSP was fouled and made one of two free throws, making the score 11-4 Lady Cougars.

Poole forced the Raiders into another turnover as she forced a jump ball, then Olivia Tucker was fouled and made both free throws, putting HSP up 13-4. Then Poole got a steal, which led to another basket by the Lady Cougars. The Lady Raiders struggled to score in the first quarter. They struggled against the defense of Holy Spirit Prep. Tucker was fouled again and made one of two free throws. Southland found themselves down 16-4 with a minute to go. Sydney Payne finally stopped the scoring drought as she scored on the inside for the Lady Raiders. Holy Spirit Prep held for the last shot, but the Lady Raiders were able to get a steal to prevent the Lady Cougars from getting a shot off. However, Southland trailed 16-6 at the end of the first quarter.

Southland turned the ball over again to start the second quarter, but Sydney Payne got a steal and was fouled. However, it was not a shooting foul, and the Lady Raiders turned the ball over again. Southland continued their cold shooting from the field, and didn’t score in the second quarter until Calyn Fort scored to make it 16-8. With 4:46 to go and Southland trailing 19-8, Macy Williams was fouled and made both free throws. HSP turned the ball over, giving the Lady Raiders another chance to score. However, they were unable to score on their next possession. Both teams went through a period in the second quarter in which they committed turnovers and couldn’t make shots. Then Williams scored again to cut the deficit to 21-12 HSP. However, with 2:58 to go in the half, Tucker was fouled again and made both free throws, putting the Lady Cougars back up by 11. Southland committed another turnover as Tucker got a steal and drove it coast to coast for a basket. With two minutes left in the half, the Lady Raiders found themselves down 25-12. They tried to score from the outside, but couldn’t hit outside shots. Then Annaleena Hansen hit a three-pointer to give the Lady Cougars a 28-12 lead, prompting Southland coach Ty Kinslow to call timeout with 1:28 left in the half.

However, with 1:12 left in the half, Calyn Fort was fouled while shooting and made both free throws. With 15 seconds left and Southland trailing 30-14, Williams was fouled and made one of two free throws, but by halftime, the Lady Raiders found themselves down 30-15. For Southland, the first half was marked by poor shooting and turnovers.

Things started out well for Southland in the third quarter as the Lady Raiders scored 10 unanswered points. Much of this was due to Macy Williams’ ability to draw shooting fouls and to make free throws. The Lady Raiders were back in the game, down only 30-24. Holy Spirit Prep did not score until Jonnise Poole made a free throw with under four minutes remaining in the third quarter. However, this seemed to give the Lady Cougars some life as Annaleena Hansen was fouled and made both free throws. Then with a little over two minutes to play in the third quarter, Tucker hit a three-pointer to put HSP back up 37-24. Holy Spirit Prep had taken the Lady Raiders’ best punches, but responded with their own as they went on a 7-0 run.

However, Southland showed their character and fought right back. The Lady Raiders came alive near the end of the third quarter, outscoring Holy Spirit Prep 8-3 in the last minute of the quarter. They only trailed 40-32 as the fourth quarter started.

Southland got off to a good start in the fourth as Sydney Payne was fouled while shooting, and made both free throws, cutting the deficit to 40-34. However, with 6:17 to go, Tucker drove right through the Southland defense to score, giving the Lady Cougars a 42-34 lead. Macy Williams was fouled on the Lady Raiders’ next possession, but missed both free throws.

With 5:31 left in regulation, Holy Spirit Prep called timeout. Out of the timeout, Southland came up with a blocked shot and got the ball. However, the Lady Raiders were unable to score. With 4:33 to go, Ashley Postell nailed a three-pointer to give HSP a 45-34 lead. With 3:30 to go, Southland was down 45-36 and had the ball, but turned it over. This allowed Holy Spirit Prep to run some clock. They were able to score with under three minutes left and led Southland 47-36. However, Tucker was called for an offensive foul, giving the ball back to Southland. Williams was able to score on the inside to cut the deficit to 47-38. At that point, HSP called timeout with 1:34 remaining. Southland would have to come up with one last run to give themselves a chance to win.

Holy Spirit Prep had the ball out of the time out. Olivia Tucker was fouled and made both free throws. However, Kathleen Kinslow responded by nailing a three-pointer, cutting the deficit to 49-41. HSP called another time out with 1:15 left. Then with 1:05 to go, HSP had the ball and Kinslow fouled Jonnise Poole, sending her to the line for a one-and-one. Poole, however, missed the front end, but Southland was unable to score on their next possession. With 40.1 seconds left, timeout was called, and Southland trailed 49-41.

In spite of losing five seniors, Southland will have five players coming back for their final season as Lady Raiders, including Macy Williams, Sydney Payne and Calyn Fort. There will also be several solid underclassmen returning next year. One could honestly say that the future looks bright for Southland Girls Basketball.