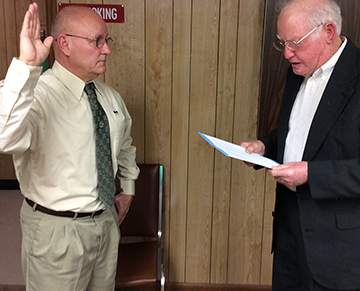 SMITHVILLE — Responding to the request of many citizens, the City of Smithville reactivated its police department with the appointment of a police chief at the city council meeting on Feb. 15.
Mayor Jack Smith and the city council named Henry Brown, an experienced law enforcement officer, as the new chief. Brown brings a wide variety of law enforcement experience to his new position in Smithville, including serving as acting police chief for Smithville in 2001.
Brown has been a law enforcement professional and trainer since 1982. He has served in various positions and in management. He served with DynCorp International as a private contractor in several countries establishing training, human rights, democracy and representing the United States as a leader in forming a partnership for stability and hope for the future.
Brown is a former officer with both the Leesburg Police Department and the Lee County Sheriff’s Office. He served as chief of the Plains Police Department in 2005 and 2006. He was a police officer with the Columbus Police Department in 2003.
Brown received a bachelor’s degree in criminal justice from Troy State University. He has an associate degree in criminal justice from Chattahoochee Valley State Community College. Throughout his career, Brown has completed extensive and ongoing law enforcement training and professional development.