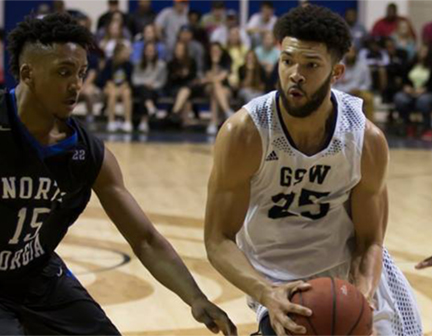 The Hurricanes defeated the Nighthawks in front of 2,688 people gathered to watch in the new UNG Convocation Center. GSW improves to 13-13 overall and 9-13 in the PBC. More importantly, they secured their spot in the Peach Belt Conference Tournament to be played this week. They are the number 7 seed.

Carrod Watson led the Nighthawks in scoring with 17 points. North Georgia falls to 12-16 overall and 10-12 in PBC play. They are the number 6 seed in the tournament.

The Hurricanes jumped out early, opening up a 9-2 lead on a Devin Watson layup with 16:57 to go, forcing UNG to call timeout. After both teams traded baskets, UNG closed the gap to 17-12 on a layup by Tyler Dominy with 11:29 left in the half. However, GSW took control the rest of the way.

The Hurricanes went on an 18-0 run over the next nine minutes to take a 35-12 lead with 2:23 left in the half.  John Mason scored seven points and grabbed three rebounds during that dominating stretch by the Hurricanes. By halftime, the Hurricanes owned a 38-20 lead.

R.J. Sessions scored a total of 18 points, 12 of them in the second half. He shot 50% (4-of-8) from three-point range. Sessions also grabbed seven rebounds, dished out four assists and recorded two steals. Hasaan Buggs recorded his 10th double-double of the season with 14 points and 13 rebounds. Devin Watson also scored 14 points and grabbed six rebounds on the day.

GSW barely outrebounded UNG 40-38, but forced the Nighthawks into committing 11 turnovers. The Hurricanes only turned the ball over four times.

Mason set a new career-high with 21 points, topping his previous best of 20 points against Augusta on Saturday, February 17. The freshman has scored in double-figures in six of his last eight games.

The Hurricanes will travel to face the number 2 seed UNC Pembroke on Wednesday, February 28, in the quarterfinals of the Peach Belt Conference Tournament. Tip-off is scheduled for 7:30 p.m.