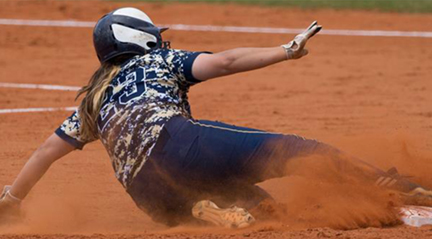 GSW freshman Elizabeth Wills slides into second base in a game earlier this season. Wills had three hits in two games against Lagrange, including her fifth home run in game two. Photo by GSW

The Lady Hurricanes are now 9-6 on the season and have won eight in a row.

GSW took game one 8-1 and followed it up with a 4-0 shutout in game two. Madason Messer and Brittany Childs each picked up victories in the circle, allowing just one earned on the day, while striking out seven LaGrange batters.

Willis hit her fifth home run of the season in the second game, tying teammate Hayley Tierce for the team lead.

In game one, GSW got on the board first in the second inning when Cassidy Burton hit a sacrifice fly, scoring Payton Singletary. LaGrange answered in the bottom half of the first on an RBI single by Taylor Tallant, tying the game 1-1.

The Lady Canes broke the game open in the fifth inning, scoring six runs on two hits and four LaGrange errors. The first run came across when Kuerzi reached on an error by the second baseman, allowing Tierce to score from second. Willis and Singletary followed that up with back-to-back RBI singles, and three runs came in when Mikela Barlow reached on an error by the left fielder to make the score 7-1 GSW.

Kuerzi led off the sixth with a single, moved to second on a wild pitch, then advanced to third on a groundout before scoring on a single by Singletary to make the score 8-1. Singletary went 2-for-3 with two RBIs and two runs scored.

In the circle, Messer scattered eight hits while giving up just one earned run over seven innings to earn her third win. She is now 3-1 on the season.

In game two, Elizabeth Willis gave starting pitchder Brittany Childs all the run support she needed in the second inning. Willis led off the inning with her fifth home run of the season. Childs recorded her second straight complete game and has allowed just one run in her last 14 innings pitched after getting the shutout Saturday.

The Lady Canes’ final two insurance runs came in the seventh. Barlow led off the inning and scored on a Kuerzi double before Allee Denney singled to bring home Kuerzi for the final run of the game. Denney went 2-for-2 at the plate after replacing Shannon Gibson, who was taken out due to an injury while Wills was 2-for-2 with two extra base hits and two runs scored.

Up next for the Lady Canes is a road trip to Montevallo for a midweek doubleheader on Wednesday, February 28. The first game is scheduled to start at 4 p.m.