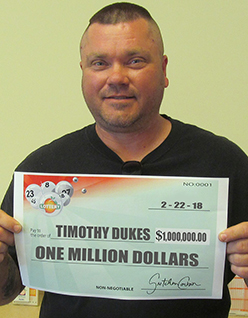 ATLANTA – Timothy Dukes of Preston has won a hefty prize. Dukes recently won a top prize of $1 million playing the Georgia Lottery’s 50X The Money scratcher.
Double D Fast Food, located at 1409 Felder St. in Americus, sold the winning ticket.
Dukes said that he had stopped to run a few errands when he purchased the lucky ticket. After scratching it and realizing he was a winner, the 54-year-old truck driver said he was in shock.
“I was sweating,” he said. “I couldn’t believe it.”
The lucky winner said that he plans to share his winnings with his family.
Dukes claimed his prize Thursday at the Georgia Lottery’s Columbus District Office.
Since its first year, the Georgia Lottery Corp. has returned more than $19.2 billion to the state of Georgia for education. All Georgia Lottery profits go to pay for specific educational programs, including Georgia’s HOPE Scholarship Program and Georgia’s Pre-K Program. More than 1.8 million students have received HOPE, and more than 1.6 million 4-year-olds have attended the statewide, voluntary prekindergarten program.
For more information on the Georgia Lottery Corp., visit www.galottery.com

By Marty Steiner Special to the Times-Recorder AMERICUS — Although much is known and written about Charles Lindbergh’s purchase of... read more