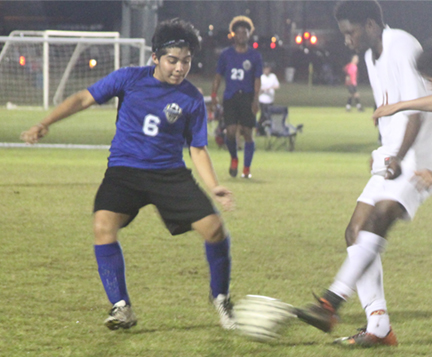 ASH Midfielder Josue Escalante with the ball against Hardaway. Photo By Ken Gustafson

COLUMBUS – The Americus-Sumter Boys Soccer Team ran into a buzz saw Wednesday night as Hardaway forward Fletcher Smith scored four goals to lead the Hawks to a 7-2 win over the Panthers Wednesday night, February 28, at the Woodruff Farm Soccer Complex in Columbus.

In spite of the lop-sided loss, ASH Head Coach Felix Jimenez was pleased with his team’s effort. “I’m very proud of my soccer players. They did what they could,” Jimenez said. “They played really hard. I’m really proud of them.

Both teams had opportunities to score early in the match. Americus-Sumter’s Jonathan Rodriguez had a shot that went over the crossbar, and the Hawks had some chances early in the match. Hardaway struck first, however, when Cameron Horan scored to give the Hawks a 1-0 lead. The Hawks followed that up with another goal. It was Fletcher Smith’s first of his four goals on the night, making the score 2-0 Hawks. Smith struck again a few minutes later, giving Hardaway a 3-0 lead. Then Smith scored on a header off a cross into the box. Just like that, the Panthers found themselves down 4-0. Hardaway thought they had another goal when Justin Daniel scored, but it was disallowed due to an offside call. The half ended with the Hawks firmly in command with a 4-0 lead.

However, just seconds into the second half, the Panthers struck for a goal. Midfielder Jonathan Rodriguez scored off a through ball by Jose Ovando, and the Panthers were on the board, trailing 4-1. Rodriguez got his second goal of the match when he received a pass from Alexis Vazquez and shot it past the Hardaway goalkeeper to cut the Hawks’ lead to 4-2. Just like that, the Panthers were back in the game.

However, the Hawks struck right back when Freddie Zamudio scored to put Hardaway back up by three goals. From then on, it was all Hardaway. The Hawks scored two more goals, the latter coming from Fletcher Smith, to complete the 7-2 win.