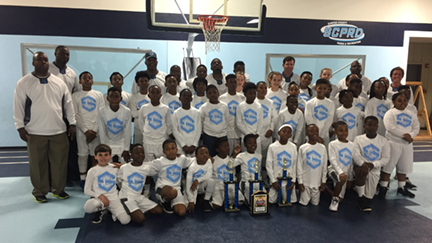 All of the Sumter County All-Star basketball teams gathered together for one picture. Photo by Ken Gustafson

Dwight Harris, who heads up the basketball program at the SCPRD, believes that four teams from the same district winning their district tournaments and going to State is an extremely rare accomplishment. “It rarely happens anywhere in the country. That’s a phenomenal, I mean a phenomenal achievement,” Harris said. “It’s good when you can get one team to go to State, but when you can get all four teams to go to State, that’s absolutely remarkable.” 12u Boys basketball all-stars are headed to Murray County for the GRPA State Tournament this Friday and Saturday, March 2-3.
Photo by Ken Gustafson

Harris, who coaches the 12u Boys team, went on to say that the players played extremely hard and well, and that the coaches did an excellent job preparing them. “Hard work, dedication and determination. That’s what we teach here at Sumter County Parks and Recreation,” Harris said. “You can do what you want to do as long as you put your heart, soul and mind in it.”

D.J. Hurley is a member of the 12u Boys All-Star team who will be headed to Murray County in Northwest Georgia for the 12u Boys State Tournament. For Hurley, winning the district tournament was the result of his team just playing their game. “We had to keep running, passing and playing defense and play our game…don’t let anybody take us out of our game. That’s what we did. We won.” 10u Boys All-Stars are headed to Carrollton, GA for their state tournament this Friday and Saturday, March 2-3.
Photo by Ken Gustafson

Reginald Jones is the 10u Boys Head Coach. “I was nominated to be the Sumter County All-Stars Head Coach. We went down to the District Tournament in Tifton,” Jones said. “We won three games. Our final game was against Crisp County. It was kind of rough, but we pulled it out. We won by 13 points. Now we’re getting ready to go to Carrollton. We start on Friday at 7:30 p.m.”

Javoris Scott is a member of the 10u Boys Team. He said that to win the championship game in the district tournament was all about fundamentals. “We had to look to score the ball and pass the ball, take shots, rebound, and make free throws and layups,” Scott said. 12u Girls All-Stars are headed to Bremen, GA for their state tournament this Friday and Saturday, March 2-3.
Photo by Ken Gustafson

Will Easterlin is the 12u girls coach. They will be headed to Bremen, GA for their State tournament. Before they could qualify for State, they had to win the district tournament in Thomasville. “In the district tournament, we lost the first game, which was a seeding round,” Easterlin said. “We had to turn around and play the same team the next day. We lost a heartbreaker in the first round. These girls showed a lot of resilience. They came back. We beat the team by 10 or 12 points in the next game. Then we went to the final game. The Tift County Girls were, I believe, the State Runner-up last year. They pressed us hard. They got us down early, and we battled back and ended up taking control of the game in the second half. We won big in the second half.” Easterlin went on to say that he knows his team is going to be playing against some stiff competition in the State tournament. “We’ve practiced hard. We’ve got a great group of girls,” Easterlin said. “They’re focused and determined. I feel like we’re going to play well.” Jesstynie Scott plays point guard on the Sumter County 12u Girls All-Stars. She said that playing good defense was the key to her team winning the district tournament. “We lost the first game, but we came back and played good defense,” Scott said. “In the third game, we played good defense.” Scott went on to say that in the district championship, she scored around 30 points. 8u Boys All-Stars are headed to Effingham County for their GRPA state tournament this Friday and Saturday, March 2-3.
Photo by Ken Gustafson

Dometrius Monts Sr. was nominated to be the head coach of the Sumter County 8u Boys All-Stars. Their district tournament was played in Thomasville. “We went down on the first Wednesday (February 21) to play the bye-in game,” Monts said. “The kids played great. We pretty much dominated the game. We went back on that following Saturday (February 24) and played twice for the championship. We ended up playing Crisp County in the championship. The kids played great. They listened, and we brought the trophy home.”  Jase Peterson is a member of that 8u boys team that will be headed to Effingham County for the 8u Boys State Tournament. “We had a lot of team work and we passed a lot,” Peterson said. “People got open for shots and scored.” Peterson went on to say that he scored 10 points in the district championship game. All the teams gathered Thursday night, March 1, in the mini gym at SCPRD headquarters to celebrate, take team pictures and have pizza. The state tournaments begin Friday, March 2.