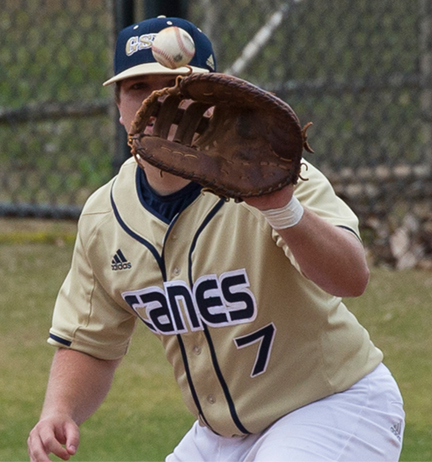 GSW Senior first baseman Jared Jones went 3-for-4 with an RBI in the Hurricanes 4-3 win over Valdosta State. Photo by GSW

GSW improves to 3-9 on the season, while Valdosta State, having lost its third straight, falls to 6-9. The Hurricanes have won three of their last four home games against the Blazers.

VSU got on the board first in the top of the second inning. However, GSW answered with two runs in the bottom of the third. Jason Baita led off the inning with a triple, then scored two batters later on an RBI single by Josh Logan. Logan later scored on a double by Andy Moore.

The Blazers fought back as they hit back-to-back solo home runs in the top of the fourth inning to regain the lead. However, the Hurricanes scored the final two runs of the game in the bottom of the fifth. Jared Jones singled to bring home Logan and Bradley Hough’s sacrifice fly turned out to be the difference.

Valdosta State used six pitchers in the game. Tristan Cone, the second pitcher used by the Blazers, took the loss (1-1) after surrendering two runs in 1/3 of an inning.

Jared Jones went 3-for-4 with an RBI for GSW. Jones has five hits over the last two games. Andy Moore added two hits, drove in a run and scored once. GSW Starting Pitcher Kyle Britt (1-0) got the win. He finished with 96 pitches over eight innings of work. Britt held the Blazers to five hits and two earned runs. He walked one batter and struck out nine. Matt Hubbard was brought in to pitch a scoreless ninth, earning his first save of the season. Hubbard struck out two batters.

GSW will try to keep on winning when they jump back into conference play as they travel to North Georgia (4-8, 0-3 PBC). They will play the Nighthawks in a three-game weekend series beginning on Saturday, March 3. Game one is scheduled to start at 1 p.m.