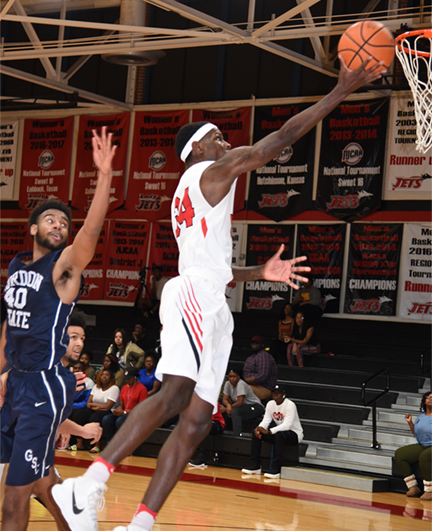 The win also allowed the Jets to secure fourth place in the NJCAA Region XVII Tournament. As one of the top four seeds during the regular season, the Jets will host a first-round or quarter-final game on Tuesday, March 6, at 7 p.m. Four other GCAA teams still have their last regular season games to play on Saturday, March 2. The results could affect the Jets’ seeding in the tournament, but as of now, it appears they will be hosting East Georgia, who is in fifth place with a 9-7 conference record.

No matter the outcome of Saturday’s games around the conference, SGT Head Coach Travis Garrett is pleased that his team walked away with a victory in their final regular season game and earned the right to host a first-round tournament game. While Coach Garrett is pleased with the win, he knows his squad has more work to do. “We have got to play consistently if we want to beat good teams,” Garrett said. “We played in spurts against Gordon last night. There were four lead changes and two ties early in the first half and at one time, we had a 13-point lead before we let Gordon come back in the final minutes and cut the lead to seven points to go into the half up 43-36.”

With it being tournament time, Coach Garrett is reminding his six sophomores to play each game like it’s their last in a Jets uniform. “We have to keep winning to keep playing. It’s that simple,” Garrett said. “It’s tournament time and we need to have everyone focused on winning the game at hand.”

During Garrett’s three seasons at SGT, the Jets are 46-47. In his first year as head coach, the Jets finished in eighth place in the GCAA. The following year, they moved up to seventh place and finished runner-ups in the NJCAA Region XVII Tournament in the 2017-17 season. This year, the Jets are guaranteed at least a fourth-place finish for the regular season and have the opportunity to improve on last season’s tournament performance.