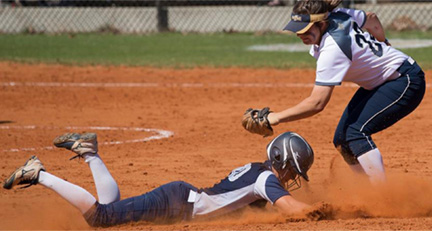 GSW Shortstop Haley Tierce drove in an RBI to beat Southern Wesleyan 2-1 in the first game of a doubleheader. Photo buy GSW

GSW is now 10-9 overall and they have taken three out of four games from the Warriors on the season. GSW Starting Pitcher Madison Messer threw a complete game while giving up seven hits and just one earned run to lead GSW in the first game.

The Warriors scored a run on three hits in the first inning as Maddie Ward came across the plate on a bases loaded walk, but that was all SWU could manage against Messer. She allowed only four hits over the next six innings to earn her fourth win of the season.

GSW tied the game in the third when Mikela Barlow led off with a double. Barlow advanced to third when Chloe Zoeller executed a sacrifice bunt. Barlow then scored on a Haley Tierce bunt single, tying the game 1-1. The winning run started with Barlow again in the fifth. She singled to lead off the inning, then moved to second on another sacrifice bunt by Zoeller.  Barlow scored when Lauren Kuerzi reached on an error by the second baseman.

Barlow went 2-for-4 at the plate, scoring two runs. Freshman Ashley Dean went 2-for-3 as the designated hitter.

However, the Warriors evened the two-game series, beating the Lady Canes 8-4 in the second game.

GSW jumped on the Warriors early by scoring two runs in the top of the first. Barlow and Zoeller both singled to start the game. Barlow moved into scoring position via a sacrifice fly and a steal before scoring on a 2-RBI single by Kuerzi.

Southern Wesleyan answered by scoring five runs in the bottom of the second inning. GSW Starter Brittany Childs wasn’t able to escape the inning and ended up being charged with five runs on six hits in 1.2 innings pitched. The Warriors added two more runs on three hits in the third off reliever Ansley Dean to make it a 7-2 SWU lead.

Georgia Southwestern State tried to get back in the game in the fourth as Kuerzi started a rally with a double to left field. Payton Singletary followed with a double, scoring Kuerzi. Singletary then scored on a single by Cassidy Burton to cut the deficit to 7-4. However, that would be as close as the Lady Canes would get. SWU added one more run in the sixth to make the final 8-4.

The Lady Canes begin Peach Belt Conference play at home with a doubleheader against Columbus State on Friday, March 9. First pitch is scheduled for 4 p.m.