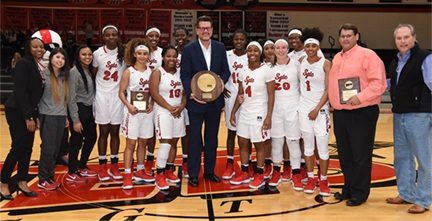 AMERICUS – The nationally ranked South Georgia Tech Lady Jets captured their second consecutive NJCAA Region XVII basketball title and are now only one win away from earning their fifth trip to the NJCAA Division I National Tournament. The Lady Jets are now 27-5 for the season.

SGT will travel to Spartanburg, SC to compete against Spartanburg Methodist College on Saturday, March 10, at 2 p.m., in the NJCAA District J Championship. The winner of that game will advance to the NJCAA Division I Women’s National Championship in Lubbock, Texas March 19-24.

This would be SGT Head Coach James Frey’s fourth trip to the national tournament in five years, and the fifth trip for the Lady Jets in nine years. The Lady Jets are currently ranked 23rd in the nation.

“There is only one game or one team standing between the Lady Jets and the opportunity to return to the national tournament,” Frey said. “This has been our goal since day one. Now we just need to make it happen.”

“We don’t know very much about Spartanburg Methodist, but right now, they are the team we need to beat to earn the right to compete at the national tournament, so we need have to come ready to play,” Frey said. “They had two starters who scored in double-figures against Denmark Tech, so we know they can score. They hit nearly 70% of their three-point attempts and 44% of their field goal shots. We will have to play aggressive defense and do a better job of scoring if we want to win.” 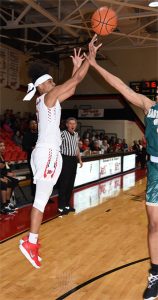 Freshman forward Ricka Jackson (1) is shown above shooting.  Jackson had 17 points for the Lady Jets in the win over East Georgia State.
Photo by SGT

In his six years at the helm of the Lady Jets, Frey has put together 20-plus winning records each season. His record at SGT is 162-40. Lady Jets Assistant Coach Kezia Conyers has been with Frey for the past five seasons. She has been a part of 141 of those 162 victories. The Lady Jets’ Esther Adenike, the GCAA Player of the Year, scored 20 points and grabbed nine rebounds in the Lady Jets to lead SGT to the 61-52 come-from-behind victory over East Georgia State in the Region XVII Tournament. Freshman guard Ricka Jackson was also in double-figures, scoring 17 points.

Only the top 24 teams in the country qualify for the NJCAA National Tournament, which is held in the Rip Griffin Center in Lubbock, Texas March 19-24. The NJCAA will release the 2018 NJCAA Division I Men’s and Women’s basketball championship seeding and at-large bids via livestream on the NJCAA Selection Show on Monday, March 12.