Sumter County Gymnast Angel Cobb won the All-Around competition in her division with an All-Around score of 38.325. Photo By Ken Gustafson

AMERICUS – About 180 gymnasts ages 5-16 from all over the state came to compete Saturday, March 3, at the Sumter Shamrock Invitational at the Sumter County Parks and Recreation Department’s gymnastics center.

The meet was hosted by the Sumter County Gymnastics Team. Melissa Singley, who heads up the gymnastics program at SCPRD, said that her team performed well and that the meet overall was a success. The other teams competing in the competition was Bainbridge Gymnasticats. Elite from Milledgeville, GA, Southeast Gymnastics Academy (SGA) from Soperton, GA and Double Dose Gymnastics from Swainsboro. The competition was divided into different categories based on age and level.

“We had some fantastic scores,” Singley said. “One of our girls got a 9.950. The highest you can get is a 10, so she was .025 away from perfect, which is a fantastic day. We had some new personal bests set by a lot of our girls on their total score and on each event. I think they had a good time doing it, so it was a good day.”

The gymnast Singley was referring to was Angel Cobb. Cobb got a 9.950 on the balance beam event. She finished first overall with an All-Around score of 38.325 in the AAU Silver Junior D Division. She scored a 9.400 on the Vault, finishing in second place in that event. Cobb finished in first in the other individual events. She scored a 9.675 on the Bars and a 9.300 on the Floor Exercise.

Cobb’s teammates, Alyssia Franklin and Ava Cook, took second and third overall. Franklin’s All-Around score was 36.800. She finished in first place on the Vault with a 9.650. She scored an 8.550 on the Bars. She finished in second place on the Beam with a 9.675 and scored an 8.925 on the Floor Exercise. Ava Cook took third place in the competition. Cook’s All-Around score was a 35.950. She scored an 8.600 on the Vault, a 9.050 on the Bars, a 9.350 on the Beam and an 8.950 on the Floor Exercise. Cook’s scores on the Beam and Floor events were good enough for third place in those individual events. In the AAU Silver Senior B Division, Sumter’s Susannah Pearce finished in second place behind SGA’s Addy Collins. Pearce earned an All-Around score of 36.300. She had an 8.800 on the Vault, a 9.050 on the Bars, a 9.600 on the Beam and a tied Emily Gore of Elite for second place on the Floor Exercise event with a score of 8.850. Pearce’s score of 9.600 on the Beam event was good enough for first place in that event.

In the AAU Bronze Junior A Division, Tailyn Biggins finished in third place overall. Her All-Around score was 34.700. Biggins finished in first place in both the Vault and Floor events. Her Vault score was a 9.350 and her score in the Floor Exercise was an 8.950. Her teammate, Hannah Horne, finished in second place in the Beam event with a score of 8.675. 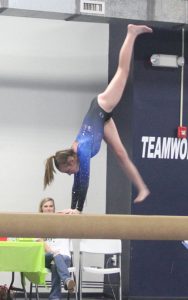 Sumter County Gymnast Kayleigh Cox finished in third place on the Beam and tied for third on the Bars in her division at the Sumter Shamrock Invitational.
Photo by Ken Gustafson

In the AAU Bronze Junior C Division, Sumter County’s Adrienna Ramirez finished in first place in Vault (9.000) and Katelynn Stuckey finished in third place in Floor (9.000). Singley went on to say that if it weren’t for the parents of the gymnasts and their efforts, this meet wouldn’t have happened. “They were my busy bees,” Singley said.

Here are the placements and scores of other notable Sumter gymnasts: