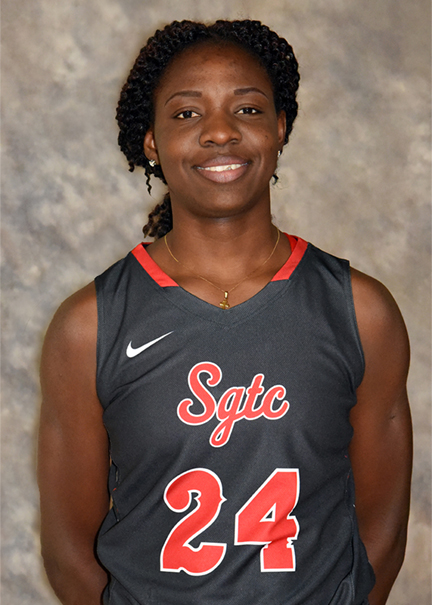 “We’re really excited that the WBCA, which is an organization comprised of women’s basketball coaches, saw fit to honor Esther “Nike” Adenike as an All-American,” SGT Head Coach James Frey said. “I think that speaks not just of her work ethic and dedication to the sport, but also to the type of person she is. If you spend any time around her, you know she always has a huge smile on her face and is thankful for every opportunity she has been given. She truly has made the most of her opportunity at South Georgia Technical College. I’m so proud of her and I can’t wait to see what the future holds for her.”

Should they win the District J Championship against Spartanburg Methodist, the Lady Jets will be heading back to the NJCAA Division I Women’s National Tournament in Lubbock, Texas March 19-24.

Adenike averages 13.6 points per game and has earned national recognition in the NJCAA standings for rebounds, blocked shots and field goal percentage shooting. Adenike is the third best rebounder in the NJCAA with a total of 318 rebounds this season. It’s the second time in three years that SGT has had the GCAA Division I Women’s Player of the Year. Adenike has started 32 games for the Lady Jets this season.

The Lady Jets made it to the NJCAA Division I National Tournament a year ago when Adenike was a freshman. That 2016-17 team set the SGTC women’s basketball record for the best record in a single season with a 30-5 overall record.

“Our goal all season long has been to the NJCAA National Tournament and finish better than we did last season,” Frey said. “We have one more game before we earn the right to go back to the national tournament. We are excited to play another game. Each game from here on out is bigger and more important than the last.”

Only 10 players from around the country are named to the WBCA All-American Team, and Adenike was the only player from Georgia selected. “The 10 members of the 2018 WBCA Two-Year College Coaches’ All-American Team are deserving of this recognition,” said Danielle Donehew, Executive Director of the WBCA. “The WBCA congratulates them for this accomplishment this season. These young women have worked to elevate themselves and their teams to an elite level, and through their exceptional talents on the basketball court, they have lifted the women’s game.”