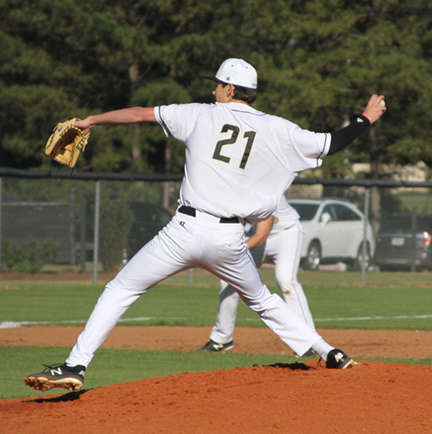 AMERICUS – The Southland Raider offense struggled at the plate against the Cougars of Crisp County. As a result, the Raiders fell to the Cougars by the score of 7-3 Wednesday, March 7, at Southland Academy.

The Raiders are now 0-3 on the season. Much of the offensive struggles can be attributed to the fact that many of the Southland baseball players are just coming off basketball season and haven’t had time to put in the practice. The Raiders played well defensively, committing only one error, but could only muster two hits at the plate. “We’ve still got a little basketball in us,” Southland Head Coach John Brady said. “This is only our third game and they’ve only been out of basketball for a week and a half. Most of the guys played basketball, so we’re still working some of those kinks out. We’re throwing more strikes now than we did last week. Hopefully we’ll throw a few more next week. That’s really a big thing for us right now. We’re trying to get a little more consistent in that area.”  Coach Brady went on to say that at the plate, the guys are really working through some basketball stuff. “We’ll go three or four at bats and look pretty good, then we’ll go a couple of at bats and look bad,” Brady said. “We’re just looking for a little more consistency all around. We find that consistency, we’ll be all right. This was a good game for us. We’ll take another shot at them next Friday.” 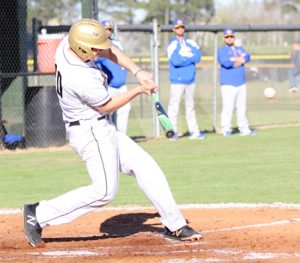 Southland shortstop Hunter McCain trying to get the bat on the ball against Crisp County.
Photo by Sheri Bass

The Cougars jumped on the board first in the top of the second inning, scoring three runs on two hits. The big damage came on a triple by Miles Napier, which drove in three runs. Southland was able to respond in their half of the second, scoring two runs without earning a hit. Hunter McCain led off the inning with a walk and advanced to second on a wild pitch. Tyler Kennedy followed with a walk. McCain would eventually score on a passed ball. Ross Minnick drew a walk and was replaced by courtesy runner James Griffin. Kennedy would eventually score on another wild pitch, and Griffin would steal second base. However, Crisp County Starting Pitcher Miles Napier retired the next three batters to end the inning.

The Cougars scored four more runs over the next five innings, while Southland could only score one more run in the bottom of the seventh.

While Crisp County Head Coach Bill Pate was pleased with the win, he was not totally pleased with his club’s performance at the plate either. “We didn’t hit the ball as good as we would have liked to have hit it,” Pate said. “We’ve been swinging the bat pretty good lately. We kind of got a little out of rhythm today, I think. We had some opportunities. They made some mistakes. We drew some walks and we didn’t get the big clutch hit like I would have liked to have had. We didn’t hit as well as I felt like we should have.”

The Raiders will try to get their first win of the season when they travel to Perry, GA to take on Westfield on Tuesday, March 13. First pitch is scheduled for 6 p.m.