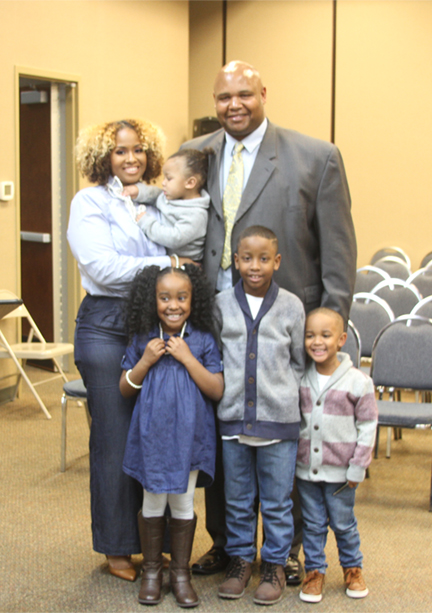 Coach Harold told the crowd assembled that he was happy to be at Americus-Sumter and couldn’t wait to get started. He also stated that he plans to impress upon the team the fact that when they put on the blue ASH helmets, they are role models and that the younger kids are looking up to them and are watching them to see how they conduct themselves on and off the field. Harold also told those assembled that while he and his coaching staff will provide a lot of love to the players, they would be hard on them and push them as far they can go.

According to Americus-Sumter Athletic Director Coleman Price, 27 candidates went through the first round of interviews. They were able to narrow it down to six and eventually to one. That one was Larry Harold.

“Coach Soliday did a great job coming in here. I talked to him before I even applied,” Coach Harold said. “He told me he got it back in the right standing and just won a region championship. We just want to come in and take off where he left off and win another region championship and go on and build it up to where we can win a state championship. This community is so hungry for a championship, but we want to do it the right way. We want our young men to be models and citizens in this community. We want them to work hard in the class room, in the weight room and on the practice field, and we feel that Friday nights will take care of itself. I’m hungry. I’m a big believer in discipline and in structure. Then we’ll have fun on Friday nights.” Coach Harold went on to say that the Americus community was what he and his family needed, and that he is what the Americus community needed. Harold was the head football coach at Central High School in Macon during the 2017 season, but saw the Americus-Sumter job as something he couldn’t ignore. “I normally wouldn’t leave so soon after a year, but Americus is a top-five job in Georgia,” Harold said. “This was an opportunity I could not pass up.”

Before he went to Central in Macon, Harold was the Head Football Coach at Brunswick High school in Brunswick, GA during the 2015 and 2016 seasons. Before his two-year stint at Brunswick, he was the Head Football Coach at Macon County High School in Montezuma, GA, where he had the opportunity to coach current University of Georgia All-American Linebacker Roquan Smith. Harold was at Macon County from April 2012 to January 2015, and was named the Region 4-AA Coach of the Year in 2014. During the 2014 season under Harold’s guidance, Macon County went 9-3 overall and 5-0 in the region, winning the region championship.

In five years as a Head Football Coach, Harold has coached 23 student-athletes who signed athletic scholarships to various colleges and universities.

Harold has also coached some other players who made it to the NFL, including Running Back Brandon Bolden of the New England Patriots, Offensive Lineman Dallas Thomas of the Philadelphia Eagles, and Defensive Back Devin Holland of the Tampa Bay Buccaneers. Harold also coached a player who ended up being CFL Rookie of the Year in 2010: Running Back Daniel Porter.

As a player, Harold played his college ball at Southern University from 1997-2001. While he was there, Southern won the Black College National Championship in 1997. The Jaguars won three Southwestern Athletic Conference (SWAC) championships in 1997, 1998 and 1999. The 1999 team was voted the SWAC Collegiate Football Team of the Decade. In 2000, Harold started for the Jaguars at Right Tackle. During the 2000 season, Southern had the highest scoring offense in Division I-AA (now called FCS). The Jaguars’ offense averaged 40.1 points a game. During the 2001 season, Harold was voted as SWAC Lineman of the Week.

Harold graduated from Southern University in 2001 with a Bachelor of Science Degree in Secondary Education and earned a Master’s of Science Degree in Administration and Supervision. Harold is married to his wife Danielle and they have five children: Larry Harold III, Le’Myah, Levi and Liam.