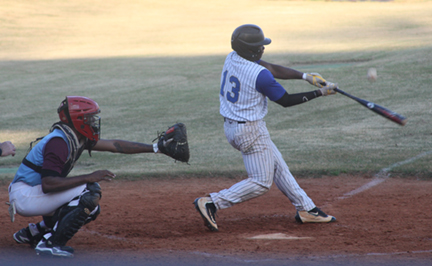 ASH Catcher Brandon Alford gets the bat on the ball. Photo by Ken Gustafson

AMERICUS – The Americus-Sumter Baseball Team overcame some wild pitches and passed balls in the top of the fourth inning and came up with a clutch hit in the bottom of the sixth by Christian Mable to defeat Carver (Columbus) 6-5 on Friday, March 9, at Thomas Bell Stadium.

“It was a hard-fought game. There was a time when it was 4-1 that we could have folded when we gave up those runs in the fourth, but our guys fought through it,” ASH Head Coach Howie Shackelford said. “The guys at the bottom of the order picked up the slack tonight, something that hadn’t happened previously.”

Shackelford was particularly pleased with the effort of catcher Brandon Alford. “What people don’t understand is this is Brandon Alford’s first year of catching,” Shackelford said. “He’s really been working hard to try to improve at that position.”

Carver scored the first run of the game in the top of the first. Trashun Gordon led off the inning with a walk, stole second base, and eventually scored on a wild pitch.

However, the Panthers struck back in their half of the first, getting two runs. Alford struck out to lead off the inning, but the Carver catcher mishandled the pitch, allowing Alford to reach first base. Terrende Rush reached first base as he was hit by a pitch. Both runners moved up as a result of a passed ball. Then Keauntavious Wilson hit into a fielder’s choice, scoring the run from third. Then Jayce Hollis got an RBI-single, and the Panthers had a 2-1 lead. 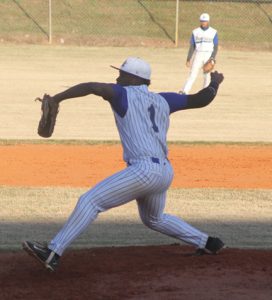 The Panthers scored two more runs in the bottom of the second to take a 4-1 lead. One key play that led to one of those runs was when Carver Catcher Edward Tatum made a careless throw to pitcher Dajon Davis after a pitch. Davis mishandled the throw, allowing a run to score.

However, the Panthers ran into trouble in the top of the fourth inning. ASH Starting Pitcher Braelin Williams had been pitching well up to that point. While he had walked six batters, he had struck out at least seven. However, he and Alford struggled in the top of the fourth with wild pitches and passed balls. This led to three runs for the Tigers.

Timothy Ethridge came in in relief for Williams in the fifth, and was able to hold the Tigers scoreless until the top of the seventh. The Panthers were able to score two runs in the bottom of the sixth to take a 6-4 lead. With two outs and a man on first, Christian Mable got an RBI triple. However, the throw to third base to try to get Mable went past the third baseman, allowing Mable to score.

The Tigers got one unearned run in the top of the seventh, but that would be as close as Carver would get as the Panthers nailed down a 6-5 victory.