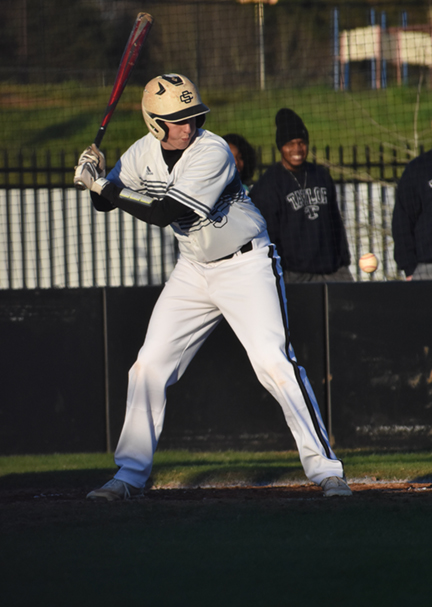 Chance Hollomon belted a grand slam home run in the top of the first inning in the Wildcats’ 16-1 victory over Crawford County. Photo by Kricket Barineau

ROBERTA, GA – Schley County’s Chance Hollomon belted a grand slam home run in the top of the first inning to set the tone for the rest of the game. It was part of a 10-run barrage by the Wildcats, which propelled them to a 16-1 route of Crawford County on Tuesday, March 13, at Crawford County High School.

The inning started off with Jordan Hall getting a single. Then Hollomon was hit by a pitch, advancing Hall to second. Then Camron Vanlerberghe hit a pop fly that was mishandled by the Crawford County first baseman. This loaded the bases for Wade Law. Law took advantage of the situation by doubling to left field, driving in three runs. Law advanced to third on the throw from the outfield. Schley’s next batter, Ashton Goodin, was hit by a pitch. Courtesy Runner Logan Wurtz was brought into the game to run for Law.

After Cameron Belcher was called out on strikes, Dylan Taylor drew a walk to load the bases again for the Wildcats with one out.

Trent Bivins then singled, driving in two runs. At this point, the Wildcats led 5-0 with one out in the inning. Garrett Peavy is then hit by a pitch, loading the bases once again. Jordan Hall was called out on strikes, so the Wildcats had the bases loaded with two outs.

This was Chance Hollomon’s moment and he took advantage of it. Hollomon belted a grand slam home run over the left field wall, giving the Wildcats a commanding 9-0 lead. All of this happened before a Crawford County batter could even swing at a pitch.

It wasn’t over yet for the Wildcats. Camron Vanlerberghe drew a walk, then Wade Law singled to left field, advancing Vanlerberghe to second. The Wildcats had runners at first and second with two outs and a 9-0 lead in the top of the first inning.

Ashton Goodin singled to left field, but Logan Wurtz was thrown out at second to end the inning. The Wildcats had scored 10 runs before Crawford County’s first at bat.

Schley County Starting Pitcher Garrett Peavy allowed one run in the bottom of the first, but that would be all the Eagles would get.

Cameron Belcher was the fifth and final pitcher used by Cheek. Belcher finished the game by not giving up any hits or walks, and he struck out two.

Southland scores five runs in the seventh inning to…