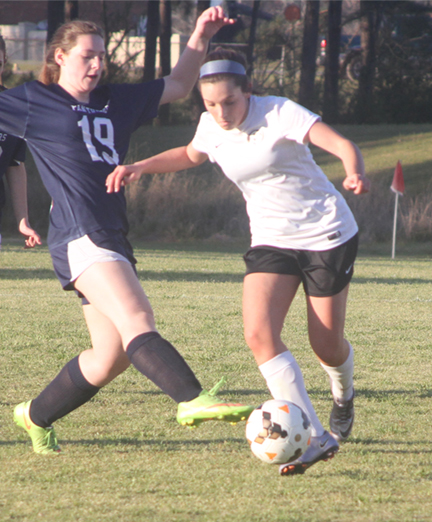 AMERICUS – It started out well for the Southland Girls Soccer Team, but the Lady Panthers of Tiftarea Academy took over in the second half, scoring three goals en route to a 4-2 victory over the Lady Raiders in Southland’s season opener on Tuesday, March 13, at Southland Academy.

In the first half, it was a back-and- forth affair, with neither team having the majority of the run of play. However, with just under 18 minutes left in the first half, Southland was awarded a free kick 35 yards out from goal thanks to a foul against the Lady Panthers. Kathleen Kinslow stepped up to take the free kick. She sent a long, high shot that went off the Tiftarea goalkeeper’s hands and into the net to give the Lady Raiders a 1-0 lead.

However, The Lady Panthers struck back when Peyton Matt passed the ball to Morgan McKay, who slotted the ball past Southland keeper Abby Franklin and into the net to tie the match at 1-1. Neither team could score another goal for the rest of the half, and the score remained 1-1 at halftime.

In the second half, Tiftarea began to assert themselves as they had more possession of the ball and created more chances to score. About seven minutes into the first half, McKay scored her second goal of the game to give Tiftarea a 2-1 lead. The Lady Panthers had a chance to take a 3-1 lead when a foul was committed by the Lady Raiders inside the goal box. Tiftarea was awarded a penalty kick. However, Francis Raines’ attempt was stopped by Franklin, and the score remained 2-1 Tiftarea. Southland’s Bailey James with the ball against Tiftarea Academy.
Photo by Ken Gustafson

Then with just under 24 minutes left in the match, Kinslow was able to get the equalizer, scoring her second goal and tying the match at 2-2. Tiftarea continued to put pressure on the back line of Southland. The Lady Raiders were able to withstand the onslaught until the 10:54 mark when Southland was whistled for a foul in the box. The Lady Panthers were awarded a penalty kick. Peyton Matt stepped up and converted the penalty kick, giving Tiftarea the lead. The Lady Panthers added an insurance goal with 8:12 left, making the final score 4-2.

“This was our first game. We’re still getting accustomed to the speed of the game,” Kathleen Kinslow said. “We’ve got to work on the little things…nothing that is detrimental to our team right now, but we need to just keep building on what we have and keep improving from that, and then we will be able to get them next time we see them.”

Though disappointed in the loss, Southland Head Coach Rundy Foster was proud of his team’s effort and not overly concerned, being that it was the first game of the season. “I thought we played hard. I thought we played well for our first game out,” Foster said. “We’re not in the shape we need to be in, but we’ll be fine. We’ll do well.”