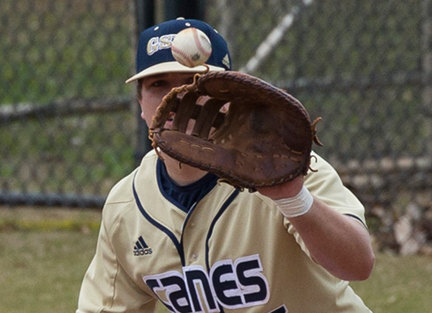 GSW Senior first baseman jared Jones went 1 for 2 and drove in three RBIs in the /hurricanes' 10-9 loss to auburn Montgomery. photo by GSW

The game started out well for the Hurricanes. Jason Baita led off the game with a single. Baita moved to second on the ensuing at bat. Then Josh Logan singled home a run to give GSW an early 1-0 lead. The Hurricanes scored another run when Jared Jones hit a sacrifice fly, scoring Kole Clark and giving the Canes a 2-0 lead.

However, the Warhawks came back in their half of the first when Donovan Chandler led off with a walk. Then Nathan Langley singled, moving Chandler to third before a sacrifice fly by Jonathan Brandt drove home Chandler. The Hurricanes’ lead was cut to 2-1.

The Hurricanes rebounded offensively in the top of the third when Jared Jones got a two-out triple, scoring Andy Moore to give GSW a 3-1 lead. The Warhawks struck back in the bottom of the fourth when Curtiss Johnson hit a solo home run to cut GSW’s lead to 3-2.

GSW loaded the bases in the top of the fifth, thanks to a pair of walks and a bunt single. Then Jones hit a sacrifice fly, scoring Kole Clark to give the Hurricanes a 4-2 lead. In the bottom of the fifth, Aaron Hill led off the inning for the warhawks with a double, and later scored on a fielder’s choice, cutting the lead to 4-3.

However, in the bottom of the sixth, the Warhawks loaded the bases on three straight walks. Then Donovan Chandler drew a walk and GSW pitcher Matt Hubbard was called for a balk. This allowed two runs to score, making the score 8-5 GSW.

In the bottom of the seventh, AUM’s Logan Nix hit a solo home run to cut the Hurricanes’ lead to 8-6. GSW responded in the top of the eighth when Kole Clark got hit a one-out triple. Then Josh Logan plated Clark on a sacrifice fly, giving the Hurricanes a 9-6 lead.

GSW was unable to get any insurance runs in the top of the ninth. That proved to be costly as Auburn Montgomery scored four runs on three hits, a walk, and two errors in the bottom of the ninth to take a 10-9 win. GSW scored nine runs on 13 hits and committed two costly errors. AUM scored 10 runs on nine hits and committed two errors. GSW stranded eight base runners, while AUM stranded seven. Auburn Montgomery improves to 9-11 on the season.

Josh Logan went 2 for 4 with two RBIs and Andy Moore went 1 for 2 with three RBIs. Kole Clark went 3 for 4 at the plate, scored four runs and drove in one RBI. Stewart Tyler started on the mound for GSW. Tyler worked five innings. He gave up five earned runs on five hits. Tyler walked six and struck out three batters. He was relieved by Jared Donalson, who pitched 0.1 innings, walking two and striking out one. Matt Hubbard came into the game in relief for Donalson. Hubbard gave up one earned run on two hits. He walked none and struck out two. He also committed a balk in the bottom of the sixth inning, which proved to be critical. A.J. Hayes came into the game in relief of Hubbard. Hayes gave up four runs on three hits. Two of those runs were unearned. He walked one batter, struck out none, and threw a wild pitch. He ended up taking the loss (0-2

The Hurricanes will have to forget about this heartbreaking loss as they jump right back into Peach Belt Conference play. Beginning Friday, March 16, they will host USC Aiken in a three-game series this weekend. Friday’s game will begin at 5 p.m. Saturday, March 17, is Schley County Day, and the first pitch for Saturday’s game will be at 2 p.m. The final game of the series will be on Sunday, March 18, at 1 p.m.

The Hurricanes are 3-16 overall on the season, and are still winless in the Peach Belt Conference at 0-12. USC Aiken is 15-7 overall and in fourth place in the PBC at 6-3.