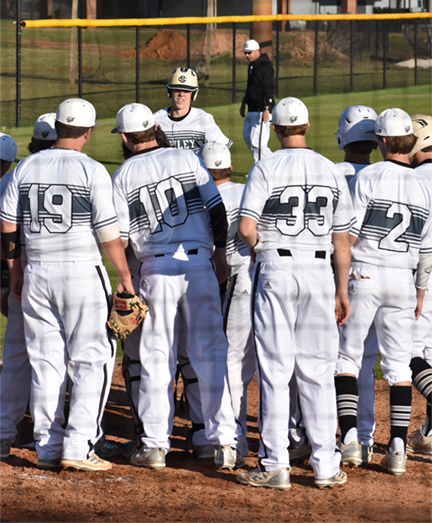 Schley County’s Dylan Taylor is met at home plate by his teammates after hitting a home run. Photo by Kricket Barineau

ELLAVILLE – The Schley County Wildcats faced a Hawkinsville team Tuesday night, March 20, that was much more prepared and much more competitive than the last time these two teams met. However, the Wildcats scored one run in the second and one in the fourth to defeat the Red Devils 2-0 at Schley County High School.

The last time these two squads met in Hawkinsville on Friday, February 23, the Wildcats pounded the Red Devils 15-0. 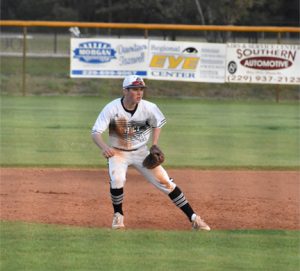 Jordan Hall playing third base for the Wildcats.
Photo by Kricket Barineau

Neither team scored in the first inning. However, the Wildcats got on the board first in the bottom of the second. Ashton Goodin led off the inning with a single. Both Cameron Belcher and Dylan Taylor flew out. However, Lorne Barineau hit a pop fly and reached on an error by the Hawkinsville catcher. Goodin had already stolen second base, and moved to third on the error. Trent Bivins singled home Goodin to give Schley County a 1-0 lead.

The Wildcats got their second and final run of the game in the bottom of the fourth inning. With one out, Dylan Taylor belted a solo home run over the center field wall to give the Wildcats a 2-0 lead. That would be all they needed. Bivins was in control on the mound, striking out 11 batters in six innings of work.

With the win, Schley County improves to 9-2 overall and 7-1 in Region 4-1A. They trail Brookstone by 1/2 a game for first place. They step out of GHSA play when they host GISA opponent Westfield on Thursday, March 22. First pitch is scheduled for 6 p.m. The Wildcats will then return the favor as they will travel to Perry, GA for a rematch with the Hornets on Friday, March 23. First pitch for that game is scheduled for 6 p.m.