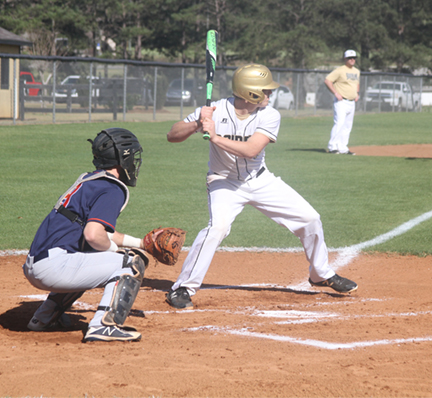 Southland center fielder Clay Owens at the plate for the Raiders. Photo by Ken Gustafson

AMERICUS – The Southland Raiders scored seven runs in the first inning off six hits to set the tone for what would be a dominating performance in a 17-7 win over Valwood on Tuesday, March 20, at Southland Academy.

The Valiants did make a comeback of sorts later in the game, which didn’t surprise Southland head coach John Brady.

“I was concerned the whole game that it wasn’t going to be that easy because they have a good baseball team over there,” Brady said. “I figured at some point, we’d have to weather something. Fortunately, we did. We were able to get through that. I was telling somebody the other day that I felt we’d been having a lot of good at bats the last few weeks, and we just hadn’t had a lot of hits…hadn’t hit a lot of balls hard.  It all came through today. We had a good day at the plate, jumped on them, and did a lot of nice things. Harrison pitched great.

Brady was referring to his starter on the mound, Harrison Bell. Bell pitched brilliantly, striking out seven batters through at least four innings of work.

The Southland offense helped him out. The Raiders scored seven runs in the first inning off of six hits. The big blow was a three-run home run by Landon Law. With one out, Tyler Kennedy was hit by a pitch, then Harrison Bell singled. This was followed by an RBI single by Hunter McCain. Ross Minick and George Wall each singled, driving in runs. After Luke Law hit into a fielder’s choice, Steven Barnes singled, driving in another run. Then Landon Law stepped up to the plate and belted a three-run home run to put the Raiders up 7-0.

The Raiders got four more runs in the top of the second. Kennedy led off with a single and Bell drew a walk. Hunter McCain singled, driving in a run, followed by an RBI double by Ross Minick. George Wall then hit a sacrifice fly, driving in another run. With one out, Luke Law drove in another run by hitting into a fielder’s choice. At this point, the Raiders led 11-0 and it looked as if the game was going to be run ruled. Southland starting pitcher Harrison Bell struck out seven batters and went 2-for-2 at the plate with an RBI.
photo by Ken Gustafson

The Raiders scored another run in the top of the third inning. However, the Valiants would not go quietly. In the bottom of the fifth, Sam Martin led off with a single, followed by two more singles from Caleb Burns and Colby McGee. Then Dane Fafard singled and drove in two RBIs. That was followed by a single by Mac McRae, which drove in two more runs. McRae reached second on an error. Jaharie Boone then singled, followed by an RBI double by J.M. McRae.

Mason Williams drew a walk, followed by an RBI single by Tayte Berry. Just like that, the Valiants had scored seven runs and the Raiders’ lead was trimmed to 12-7. Ross Minick was brought in to pitch in relief of Bell. Minick struck out the next three batters to end the threat.

Southland responded in the bottom of the fourth. With one out, Tyler Kennedy reached on an error by the Valwood shortstop. Bell drew a walk and Hunter McCain singled. Then Ross Minick singled, driving in two runs. At this point, Southland led 16-7.

Minick was solid the rest of the way for the Raiders. In the top of the sixth, he allowed one walk, but got Mac McRae to hit into a double play. He then struck out Jaharie Boone to end the inning.

All the Raiders had to do in their half of the sixth was score one more run to end the game. Landon Law led off the inning with a double.  Then Clay Owens reached on an error. Owens eventually made it over to second and Law was at third. This set the stage for Kennedy to drive in the run that would end the game. Kennedy did just that as he singled home Law to end the game at 17-7. Kennedy went 3-for-4 with an RBI. Landon Law went 2-for-4 with a three-run homer in the first, and scored the game-ending run. Ross Minick went 3-for-4 and drove in four RBIs. Hunter McCain went 3-for-4 with two RBIs.

“It’s not just me doing all the work. I’ve got my teammates to have my back,” Harrison Bell said. “There are what really helped me out throughout the innings, and my hitting coach (Rod Muray) said ‘If that first pitch is there, hit it,’ and that’s what I did that first at bat.”