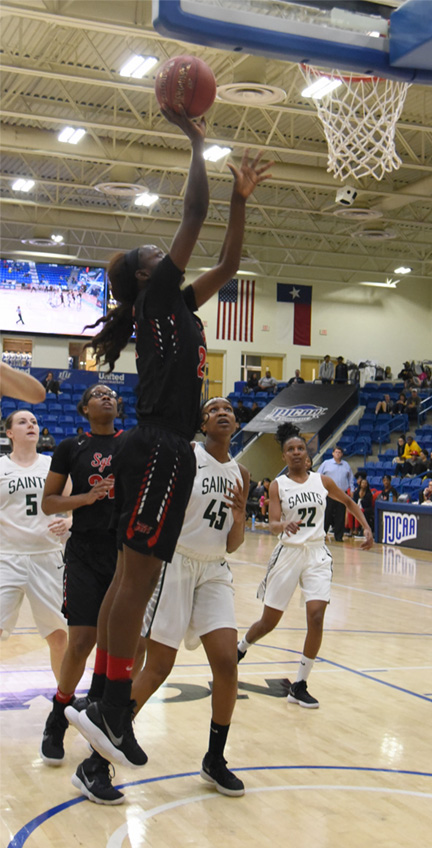 SGT sophomore forward Esther Adenike goes up for a rebound against Seward County Community College in the NJCAA Division I National Tournament. Photo by SGT

LUBBOCK, TX – The South Georgia Tech Lady Jets overcame a 12-point deficit against Seward County Community College to take an 81-79 lead with 2:17 left in the game. However, the Lady Saints held SGT scoreless for the last two minutes and won 88-81 Tuesday night, March 20, in the sweet 16 round of the NJCAA Division I Women’s Basketball Tournament.

“We had the opportunity to pull this one out,” SGT head coach James Frey said. “I am so proud of these girls for not giving up. They gave 100 percent effort and showed a lot of people that we were much better than a 23rd seed in this tournament.”

Seward County is the best three-point shooting team in the NJCAA across all divisions. They lived up to it in the game against the Lady Jets. They went 17-for-34 from beyond the arc. Twelve of those 17 three pointers came in the first half.  The Lady Saints shot 54.5 percent of their three-point attempts in the first half and ended the game shooting 50 percent.

Despite the hot shooting from beyond the arc by the Lady Saints, SGT was up 20-19 by the end of the first quarter. Seward County outshot the Lady Jets in the second quarter 33-20 to take a 52-40 lead at halftime. The Lady Jets outscored Seward County 27-20 in the third quarter to pull within five points by the start of the fourth quarter. 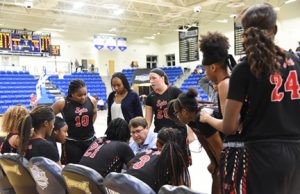 SGT head coach James Frey during a timeout in the game against Seward County Community College.
Photo by SGT

The Lady Jets continued to chip away at Seward County’s lead and pulled ahead 81-79 with 2:17 left in the game. The Lady Saints took advantage of fouls and three-pointers to secure the 88-81 victory.

South Georgia Tech ends its season at 29-6. Seward County advances to the quarterfinal round with a 31-3 record. The Lady Saints will play the defending national champion Gulf Coast College Lady Commodores on Thursday, March 22.

“This was a great season,” Frey said. “I think the team played their hearts out here in Lubbock and I am very proud of them on and off the court.”