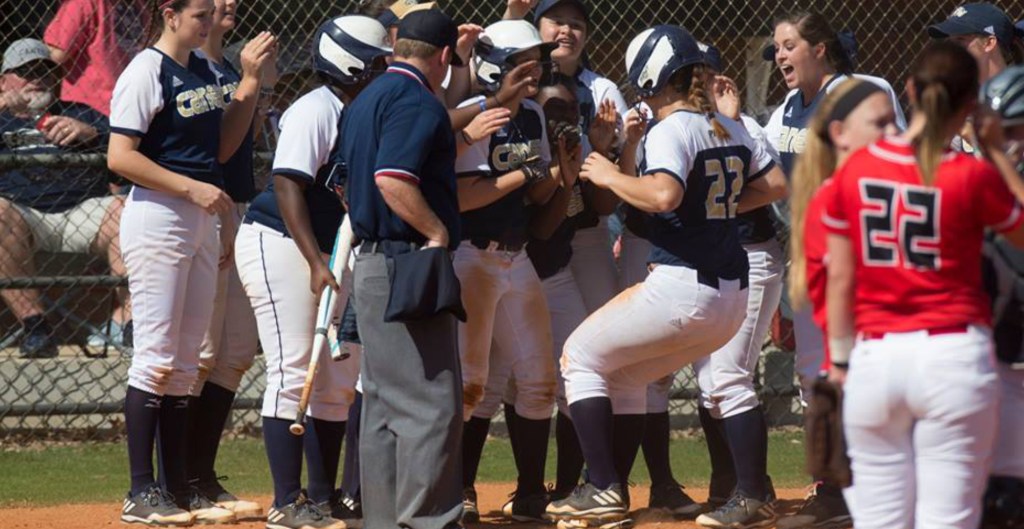 Tierce now has four home runs to go along with eight RBIs while hitting .700 in four games this week.

West Georgia jumped out to a 6-0 lead by scoring six runs in the bottom of the first off of GSW starter Shannon Gibson. The Hurricanes were able to cut into the lead in the third when Tierce scored on a fielder’s choice and Gibson scored on a throwing error by the UWG third baseman, making the score 6-2 West Georgia.

The Wolves scored three more runs in the bottom of the third thanks to two hits and an error. GSW responded with one run on a single and an error to make the score 9-3 UWG.

The Wolves scored two more runs in the bottom of the fourth to take an 11-3 lead. However, the Hurricanes wouldn’t quit.

Ansley Dean started an eight-run rally by the Canes with a two-run single, scoring KaLynn Church and Mikela Barlow. This was followed by an RBI single, bringing home Cassidy Burton. With the bases loaded, Tierce stepped up to the plate. She promptly hit a grand slam home run to pull the Hurricanes to within two at 11-9. The Canes still weren’t done. After Lauren Kuerzi singled, Elizabeth Wills hit her sixth homer of the spring, a two-run shot over the right field fence to tie the game at 11-11.

UWG answered quickly in the bottom of the fifth. The Wolves scored two runs on two hits and another GSW error. GSW mounted another comeback thanks to RBI singles by Wills and Gibson to tie the game at 13-13 after 5.5 innings.

The game was tied until the bottom of the seventh when West Georgia’s Mallory Walker hit an RBI single to give UWG the 14-13 victory in the first game.

In Game 2, West Georgia took control and maintained it throughout the game. The Wolves scored early and often. They scored two runs in the first inning and four in the second to take a 6-0 lead. KaLynn Church was the starting pitcher for GSW and lasted an inning. She gave up five runs. Four of those runs were earned. Church was then replaced by Ansley Dean with no outs in the second.

GSW wasn’t able to generate any offense against UWG starter Katie Foote. The Hurricanes combined for just four hits in six innings as a team after recording 17 hits in the first game.

Dean gave up eight hits in four innings of work, but allowed only one run in the second, fourth and sixth innings. Dean hit a double to lead off the game. That was the only extra-base hit for GSW in the shortened six inning run-ruled game.

In Game 2, Tierce, Wills and Chloe Zoeller all singled for the Hurricanes.

The GSW softball team (11-18) steps back into Peach Belt Conference play when they host USC Aiken in a doubleheader on Saturday, March 24. The first pitch for Game 1 is scheduled for 1 p.m., followed by Game 2 at 3 p.m. On Sunday, March 25, GSW will host another PBC opponent, Lander University, in a doubleheader. The first game is scheduled to start at 1 p.m., followed by the second game at 3 p.m.