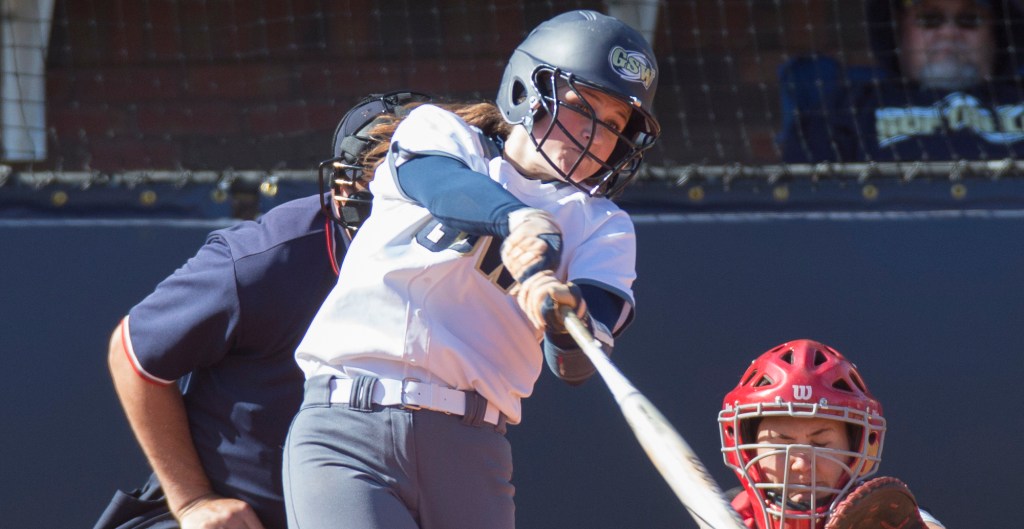 GSW freshman Elizabeth Wills turned in solid performances against USC Aiken and Lander University. In four games, Wills went a combined 5-for-15 with six RBIs. Wills is now second on the team in batting average, home runs and slugging percentage. Photo by GSW

AMERICUS – The GSW Softball Team (15-18, 4-4) is on a hot streak. They won four-straight games conference games over the weekend. They swept USC Aiken in a double-header on Saturday, March 24, 7-1 and 6-5. Game 2 went nine innings. College softball, as well as high school, only plays seven.

On Sunday, March 25, Lander University came into Lady Canes Stadium and got swept in a double-header by GSW 6-5 and 5-4. Game 2 in that double-header went 10 innings.

In the first game against USC Aiken, GSW starter Madason Messer pitched one of her best games of the season. She threw a complete game, allowing only one run on eight hits and striking out three to earn her fifth win of the season.

With the game tied at 1-1 in the bottom of the fifth, the Lady Canes got the bats going. Mikela Barlow singled to lead off the frame. One out later, Barlow stole second and scored on an RBI single by Lauren Kuerzi. Shannon Gibson hit her first home run of the season, a two-run homer to give GSW a 4-1 lead.

The Lady Canes added more insurance in the sixth when Hayley Tierce hit her 12th homer of the season and the 40th of her career. It was a three-run blast over the center field fence to make it 7-1 GSW. That would be the final score in Game 1 against USC Aiken. Tierce now has 38 RBIs on the season.

Messer started the second game against the Pacers, but wasn’t as successful. Hannah Price hit a two-run home run in the first to give USC Aiken an early 2-0 lead. The Lady Canes scored one run in the bottom of the first, and were poised to score more as they loaded the bases with one out. However, back-to-back strikeouts ended the threat.

Messer gave up back-to-back singles in the top of the third, forcing GSW coach Nicki Levering to make a pitching change. She brought in Brittany Childs. However, the Pacers scored two runs in the inning and took a 4-1 lead.

With one man on in the bottom of the third, freshman Elizabeth Wills hit her seventh home run of the season, cutting the deficit to 4-3.

After four straight scoreless innings, Wills struck again, getting a big hit and sending the game into extra innings. Hayley Tierce doubled, then Wills belted an RBI single, scoring Tierce and tying the ball game. The game would need more than seven innings to decide a winner.

The Pacers got a run in the top of the eighth to regain the lead. However, in the bottom of the eighth, Grayson Sanders hit a one-out single. Then Chloe Zoeller hit an RBI double down the left field line to tie the game again at 5-5.

GSW reliever Ansley Dean retired the Pacers in order in the top of the ninth. Then it was the Lady Canes’ turn to win the game. Tierce led off the bottom of the ninth with a single, then moved to second on a wild pitch. With Tierce in scoring position, Wills delivered a walk-off RBI single, scoring Tierce to win the second game 6-5 and sweeping the double-header with USC Aiken.

Ansley Dean got her first win of the season for GSW. She worked three innings, allowing one run on two hits and striking out three.

The magic continued for GSW the following day. On Sunday, March 25, it was Lander University’s turn to get swept. GSW won the first game against Lander 6-5. It didn’t start out well for the Lady Canes as the Bearcats scored two runs in the top of the first off of starter Madason Messer. However, GSW scored three runs in the bottom of the first. Shannon Gibson got GSW on the board with a two-run single and Wills would later score on an error to give the Lady Canes a 3-2 lead.

Lander responded by scoring two runs off Messer in the second inning. It could have been worse as the bases were loaded with two outs, but Messer was able to get the next batter to ground out to end the inning. GSW responded by tying the game at 4-4 in the bottom of the second. Chloe Zoeller led off the inning with a single, then Wills singled to right field, scoring Zoeller to tie the game.

Lander would retake the lead in the fourth inning. The Bearcats got two singles and a ground out, putting runners in scoring position. Sydney Grimes then hit into a fielder’s choice, scoring Jace Benefield.

GSW junior Hayley Tierce belted her 12th homer of the season and the 40th of her career in the 7-1 victory over USC Aiken in Game 1 of the double-header.
Photo by GSW

However, GSW responded again in their half of the fourth. Mikela Barlow hit her third home run of the season to tie the game at 5-5. The Lady Canes took the lead for good in the fifth, thanks to another hit from Barlow. Graysen Sanders led off the inning with a single and moved to third when Ansley Dean lined out. Sanders had already made it to second on a sacrifice bunt by Chloe Zoeller. Then Barlow hit a two-out, RBI single, scoring Sanders to give GSW a 6-5 lead. The Lady Canes would not relinquish the lead again.

Messer was able to retire the Lander batters in order in the sixth and seventh innings to give GSW the 6-5 win and improve her record to 6-1 on the season.

In the second game, Lander scored two runs in the third off GSW starter Brittany Childs. Lander scored an unearned run in the top of the fifth, and the Bearcats had a 3-0 lead.

Lander added another run in the seventh inning on a home run by Halie Sorrow. However, the Lady Canes were not about to quit.

In the bottom of the seventh, Dean reached on an error. Barlow drew a walk, then Hayley Tierce followed with an RBI single, making the score 4-1 Bearcats.

Lauren Kuerzi came through with an RBI fielder’s choice on a squeeze bunt that caught the Lander infielders off guard. Barlow scored on the bunt, and there were runners at first and second. Wills followed with a sacrifice bunt, moving Tierce and Kuerzi into scoring position with one out. Gibson then hit into a ground out, scoring Tierce. Kuerzi scored the tying run when Lander committed a throwing error.

The eighth and ninth innings went by with neither team able to score. However, GSW ended it in the 10th. Shannon Gibson doubled to right field and then scored on Graysen Sanders’ RBI single to cap an incredible 5-4 come-from-behind victory for the Lady Canes.

GSW will try to keep the streak going when they host West Georgia in a double-header on Wednesday, March 28. First pitch for Game 1 is scheduled for 3 p.m., followed by Game 2 at 5 p.m.