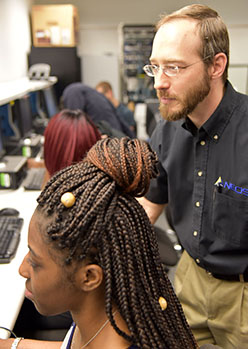 Workshop facilitator and SGTC alumnus Christopher Saunders looks onto the computer screen over a student’s shoulder as they get one-on-one training during the recent workshop for current computer information system students.

AMERICUS — Christopher Saunders, a 1998 South Georgia Tech graduate and current information technology (IT) professional, recently revisited his Alma mater to teach current network specialist students about the computer’s active directory.
The workshop was held for a small group of students who are enrolled in Microsoft Client, the first course in a sequence of courses that teach students how to connect to a network and engage with the Microsoft Active Directory.
Due to the workshop’s size, students were able to get one-on-one time with Saunders, ask questions and learn hands on from a professional how a network communicates with a server.
Before he was a professional in the industry however, Saunders started in the same spot the students who he was teaching sat, which inspired him to say “yes” when asked if he would host the workshop.
“I came back because I want to help these students succeed in their careers and help them learn by doing, similar to how I started out,” Saunders said. “It’s one thing to read about a process in a book. It’s a completely different thing to work on something hands-on and get that real-world experience.”
Saunders came to South Georgia Technical College (SGTC) in the mid-‘90s after attending Georgia Southwestern for a short time. During his time at GSW, he realized that to learn computers, he would have to go deeper than reading about it. With that thought, he decided to enroll in the computer information system program at SGTC to take a more hands-on approach to his education.
Although Saunders was getting his real-world practice in the lab, he felt that it wasn’t quite enough. To fill that gap, he began volunteering to fix the department’s non-functioning computers in his spare time. Through doing so, he learned how to troubleshoot as well how to repair the lab’s computers. Additionally, he helped update the computers in preparation for the Y2K bug — a computer flaw that would have caused computers to malfunction past the date Dec. 31, 1999.
Due to the close working relationship between the two colleges, Saunders actually received his associate’s degree in computer information systems from GSW in 1998. Since his graduation however, he has not turned his back on his roots. He has returned to SGTC at least twice a year since 2013, to serve on the CIS Advisory Committee, which is a group of peers who meet at the college each spring and fall to discuss the current state of the industry and how the program can be improved upon.
“Saunders was an outstanding student who was destined for success,” SGTC’s CIS instructor Andrea Ingram said. “I am extremely delighted for his achievements and grateful to have known him as a student and now as an accomplished information technology professional.”
Saunders now works for NEOS, a tech support and consulting company in Albany, as the company’s Senior Network Engineer — doing day-in-and-day-out what he taught the students during his workshop. The company manages over 1,400 devices and provides support to hundreds of local and regional businesses.
SGTC’s curriculum focuses on teaching its students the “hands-on” way. By doing so, SGTC students are job-ready upon graduation.